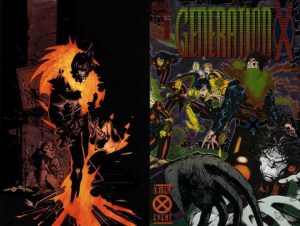 “Mom…that guy has some kind of bio-nuclear psionic biokinetic field inside him.”

Generation X #1 was the spiritual successor to “the New Mutants” legacy, springing out of the X-Men crossover event “Phalanx Convenant.”  It launched with a shiny chromium cover that the 90’s collectors used to love and hate (personally I loved them and still do.)  Everyone on the team was introduced previously, either long ago in Banshee’s case, or right before in the previous crossover.  While two other characters make their appearance in this issue, the villain Emplate and the convoluted Penance, Chamber is introduced and steals the spotlight.

Lobdell does a great job in the issue to establish the dynamic of the new team and direction the relationships and characters will take.  As a first issue of a new series it gets the ball rolling quick with the students squabbling and beginning to test out their powers.  The White Queen and Banshee begin to clash with different teaching methodology.  There is also the introduction of Emplate, a recurring villain who comes to feed off of Chamber which begins a quick fight that shows the students aren’t yet a team.  Chamber has very little dialogue in the issue, but he has some of the best panels of the comic.

This is due large in part to Bachalo’s pencils.  No one draws Chamber quite like he does.   Not all characters get their best design or costume down from the very start, but for Chamber, his original look is the best.  You have him all in black, the leather jacket, the bondage looking bandages wrapping up his torso, and of course the signature psionic energy chest that blew away the lower part of his face.  We’ve had scares before with bad costume designs for him; his transformation into Decibel in the subpar New Warriors being the worst.  Here though he shines from the first time his bandages are ripped away by Emplate and his psionic energy bursts forth chaotically throughout the pages.  You can just see how powerful he is going to be with this raging furnace coming out of him.

There isn’t much time to dig into the character in this issue, but it does set him up very nicely.  His design is top notch (having half a face and only partial upper torso just makes him that more awesome.)  His powers are fairly well established from the beginning as well, thanks to my favorite quote from the issue referenced at the top.  You also get a taste for his telepathic speech ability, which comes in handy for him with no mouth.  Unfortunately in the last few years, writers don’t seem to understand what they should do with the character.  It’s a shame he is such an underused character; so if creators need a muse for which to write him back to prominence, Generation X #1 is a great place to go back to.