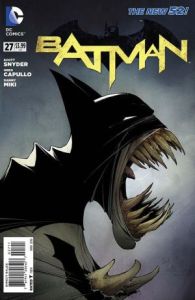 I’ve had a mixed experience with this series since the beginning of the new 52.  During the opening Court of Owls arc, I stopped reading because I was underwhelmed.  When they started the Death of the Family arc, I picked it back up mostly because who doesn’t love the Joker?  Now in Zero Year it’s had some ups and downs; it hasn’t been my favorite Batman arc, but this issue was superb.

Picking up right where Batman #26 left off, the police have cornered Batman and are not looking to jst bring him down to that station.  Bullets fly, and with still recovering from the beating he took from Dr. Death, Batman is outmatched.  As he tries to escape, Commissioner Loeb even leaves him the worst present ever, a live grenade waiting in the Batboat to destroy it.  Eventually Batman is able to propel himself out to sea and away from the police eager to kill him, where Gordon finds him and helps him escape.

This is one part of what I loved about this issue.  Greg Capullo’s art is always fantastic, but Scott Snyder delivers some of the best dialogue I’ve read from this series here.  Previously readers were lead to believe that this younger Gordon was possibly as corrupt as the rest of the police force.  In a little one on one with Batman, he explains he is helping him because of Bruce Wayne, of all people.  The misunderstanding a young Bruce had in his first encounter with Gordon is revealed and we now can all breathe a sigh of relief that this is the straight and narrow Gordon we all love.  Bruce Wayne coming back to Gotham had reinvigorated Gordon.

Once Batman takes his leave, next up we have an excellent conversation between Alfred and Bruce.  You can see the love Alfred has for Bruce, and the hurt he experienced while Bruce was away with no contact during training.  He seems to have nailed why Bruce is so angry at him and Gordon, something that I was happy to finally have broached upon.

At the end Batman continues his search for Dr. Death, deducting where his hideout must be.  Things can’t come easy for him during his first year though as he runs right into a trap.  The mastermind behind Dr. Death is then revealed, which shouldn’t come as to much of a surprise to current readers.

It is getting a little old in this arc to see the beating that Batman is taking and enduring, but it does give a chance to see Capullo’s exceptional pencils in action.  This issue gives you excellent insight into the relationship Batman has with two of his closest allies.  I haven’t really cared about Dr. Death, but revealing that he is actually working for another villain piqued my interest more.  Even if you don’t pick up another issue of this series, this is one to check out just for the great characterization. 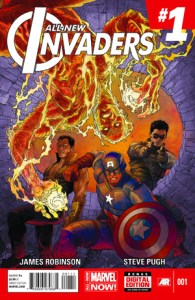 Right off the bat, I was happy to see a new series come out of Marvel Now that was not just another relaunch to slap a #1 on the cover.  I’ve always been interested in the Invaders, and it brings back the original four to team-up once more (even Namor unfortunately; I just don’t like him.)  Of course this is going to be one of those titles made to tie-in marketing wise with the new Captain America movie as they’ll both feature Cap and Bucky.  I’d expect the first arc will be done in time for a TPD to be on shelves when the movie releases.  Even if this is the case, it doesn’t mean this is a bad book; actually on the contrary, it was actually a great first issue.

Robinson begins the story not from the perspective of the three most famous characters, but from Jim Hammond’s view, the original Human Torch.  After the events of the Secret Avengers, he is found to be living in a small town working as a mechanic at a local shop and frequenting the local diner for pie and coffee.  Things never stay quiet for heroes long though, and Tanalth the Pursuer of the kree comes looking for Jim, murdering the owner of the shop he worked in.

A battle between the two ensue, but Jim is quickly zapped with a gun to make him relive a memory that he has no recollection of.  It brings him back to a battle against the Nazi’s during WWII.  Baron Von Strucker has a device that is controlling Hela, the Asgardian goddess of death.  Jim, Namor, and Bucky are part of the fight, but Captain America is interestingly enough not.  Instead another character is fighting with them, Major Liberty.  The Major foolishly tries to take on Hela by himself while the others are still fighting the Nazi soldiers, and is quickly killed for this mistake as the life energy is drained from him.

Cutting back to the present, Tanalth explains she is looking for the device Strucker used to control Hela.  Apparently after the battle in the past, the device was disassembled and hidden by the surviving three Invaders from the fight.  Not being inclined to help, Jim gives it all he has and starts their fight again, but he is quickly defeated by Tanalth’s power.  When all seems lost, two of his former teammates come to his rescue to bring the issue to a close.

Pugh’s art is very good; everything is very fluid, and the battles are drawn in a very cinematic way.  I’m looking forward to see what he brings to the table the next few issues.  Robinson quickly set up an interesting premise and a few mysteries for the next issue, such as why was Captain America not present during the WWII fight, and who was Major Liberty.  Originally it wasn’t an issue I was going to pick up, but in the end I’m glad I did.  It’s a great start and I can’t wait for the next issue.