This list is a ranking of the top ten versions of the Teenage Mutant Ninja Turtles.  We scoured through the various media version of the Turtles from comics, television, and the movies.  Towards the bottom you’ll find the worst the Turtles have seen since the beginning, going all the way down to the best versions that the media has gotten right!

Check out our top ten below and of course let us know your thoughts in the comments below!

Rumor of the female turtle are true!  So upon my research this thing was found and WOW!  Terrible!   It was designed as a take off from the original movie series.  The Turtles themselves are animated like Chucky Cheese characters. Venus is the name of the female Turtle that we all wish we could forget, especially Eastman and Laird. Clearly the show was created for kids, but that doesn’t excuse just how plain bad it is.  I wonder if my four-year old will like it? Well, at least she did.

9. Teenage Mutant Ninja Turtles II The Secret of the OOZE (1991)

So after the success of the first Turtles film, the second one was born soon after. It looks like Vanilla Ice singing, “Go Ninja! Go Ninja!”.  The highlights?  David Warner created BeeBOP and Rock Steady. The Shredder is really short. It’s was just 90’s trash. The OOZE is the chemical that created the turtles.  On a plus side this film is dedicated to Jim Henson; how can you not appreciate that?

Some would say this one was worse than the second, but not us even though it’s a slim margin.  The story is that the Turtles go back in time to rescue April O’Neil.  She was transported back to 1603 Japan.  The second sequel was fun but still cheesy as hell.

The Turtles do another time travel adventure but this time they cross-over with different versions of themselves. The actors voices are changed but the action is solid.  It showed that Nickelodeon has an excellent handle of the turtle franchise.

This is one year after Batman had begun the comic book blockbusters. It introduced the turtles to live action and made it fun to eat pizza again. The Turtle were created at Henson’s workshop and work really well in some of the action scenes. It was a good vehicle introducing the concept to new Turtle fans. We still have a toy lying around somewhere for me to step on.

The most recent installment in the Turtle lore. They upgraded to look with CG graphics and hyper action, but forgot to include  a story we actually care about. Here’s to hoping they learn their lesson and make it better on the second go around. Micheal Bay produced this version and pulled off the darker aspects quite well.

This animated series lasted 10 years. It touched on every subject or villain that the Turtles ever faced. It was a solid show for the kids and a guilt pleasure for the adults. It still stands strong as one of the best hand drawn animation series made. It still has a lot of the 90’s humor that made the Turtles popular.

With the release of the new film, Nickelodeon had to refresh the Turtles. This time they used solid computer animation and a much darker design. They re-introduced several characters such as Casey Jones, but used a much younger Jones. It works well. This series will probably last a long time since the interest in the Turtles has been refreshed.

This is one of the best incarnations of the Turtles. It was the first true computer animated Turtles created. It had a nice dark tone and sleek look to the Turtles. The story was a little high and mighty with the hand bring out giant monsters for the Turtles to fight. The best part of the show was the tremendous vocal talents including Chris Evans, Sarah Michele Gellar, Patrick Stewart and Mako. This to was Mako’s last role. I think it’s one of the purest forms above the comics made so far. 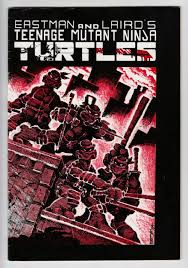 Yes! This is number one, good old pulp fiction. It started it all and we love it. Four Ninja Turtles that took us all by storm and it didn’t stop from there. If you ever get to see Kevin Eastman talk about it all started, make sure to sit down and listen!  This is indie comics at it’s best.  It’s dark and gritty. The Turtles don’t have colored masks to tell them apart, and that’s how it’s supposed to be.  The original comic series was awesome!