In this week’s installment of Comic Closet we are going to take a look at the wardrobe of one of the most popular and powerful X-Men characters around, Rouge.  She’s been a core member of the X-Men since her leave from the Brotherhood and she’s had a very chic wardrobe selection since.  Let’s take a look back at some of her most memorable selections.

5.  Original / 80’s: The costume she made her villainous debut in as she laid a beating on the Avengers (Carol Danvers especially.)  This version didn’t last overly long as it was replaced by the green and black costume that made her look ready for step aerobics at a moments notice.  This one is a classic though, it reminds us of how she started, and how far she’s developed. 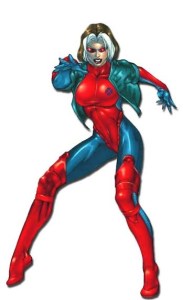 4. X-treme X-Men:  When the X-treme X-Men group splintered from the rest of the X-Men to search for Destiny’s diaries, the entire team received a makeover for their new mission statement.  The team decided to color coordinate, so it was out with any of Rogue’s trademark green and have it replaced with red.  It did keep a mini jacket on her, though.  This was a good costume that served its purpose until the title ended, but luckily for us the red sunglasses didn’t follow her into any other series. 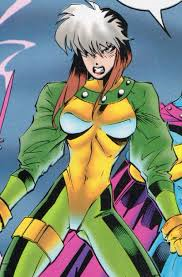 3.  Age of Apocalypse:  In 1994 Charles Xavier was killed by his own son, Legion, and the Marvel 616 universe was tipped upside down.  In this amazing crossover event, of which likes we my never see again, everyone came out in the new universe with a slightly different personality and a fresh coat of paint.  It resembles her 90’s costume with the yellow and green, but ditches the jacket and belt.  Aligning with the team, she has the studded neck collar to make sure they matched while protecting humanity.  It was one of the best comic events ever and she had a excellent new costume for it. 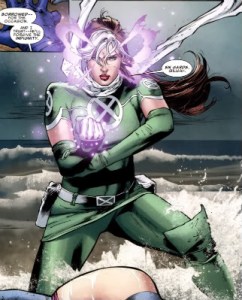 2. X-Men Legacy:  Personally choosing between which costume should be number two and number one was a tough decision.  This one is fantastic.  During X-Men Legacy there were a couple slight variations on this design, but this is my favorite.  It said a lot about her as a character at this point; she showed a little more skin on her arms because she finally has full control of her powers.  This was something longtime fans thought may never happen unless she lost her powers altogether, which had happened before.  She led her own team again finally as well, so of course she needs to show off a few extra X symbols.  Finally, I’m not usually a scarf person, but the scarf pulls it all together for me. 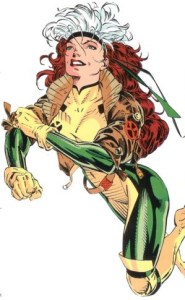 1.  90’s:  Alright, so maybe deciding which costume should take the top spot wasn’t such a hard decision after all.  I love this costume!  I love Jim Lee!  I love Rogue!  All in large parts due to this uniform.  It fit in with the rest of the team by featuring the yellow, but she kept her trademark green on it to.  Plus, the jacket is just all sorts of awesome.  As for the headband?  Sorry Rambo, but it looks slightly sexier on Rogue as she soars through the air to battle.