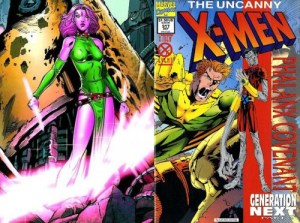 “And we’re to sit back while you attack and kill!  No Harvest…not me!”

One of the biggest, and most memorable legacies of the Age of Apocalypse universe was Clarice Ferguson, known better as her mutant name, Blink.  She survived what we believed to be the destruction of the universe at the end of the original event, and was whisked away to fix other broken realities with the Exiles.  Before the Age of Apocalypse though, Clarice was first introduced to us in the Marvel 616 universe in The Uncanny X-Men #317, before disappearing into another realm the next issue.

Blink’s powers allow her to teleport herself and others anywhere she wishes.  With this she also has the ability to use her powers offensively.  She can cause severe damage by only transporting part of a person or object.  She can focus her powers into small “javelins” that she can throw to transport a person or object as well.

The 616 version of Blink’s origin is mostly clouded in mystery.  It is believed however, that her true ancestry is tied to Apocalypse.  Frederick Slade, a member of the Clan Akkaba which is a group of Apocalypse’s genetic descendants, had pink hair, green eyes, and had the power to teleport.  Ensuring that the genetic line would continue, Apocalypse’s servant had Frederick mate with a woman named Miss Ferguson.  These two are believed to be Clarice’s direct descendant.  She was brought into the X-Men’s sphere when the techno-organic Phalanx captured her and several other new mutants.

We find her locked into a holding cell by the Phalanx, trapped with Monet, Husk, Skin, and Gregor.  The five have been captured in hope the Phalanx can assimilate their powers.  While Husk and Paige try to figure a way out, Blink is terrified and the others try to calm her down.  When the Phalanx known as the Harvester comes to see how the assimilation is going, Blink transforms her terror into rage and uses her powers to severely injure their captor.  Gregor stops her before she can finish the villain off.

Monet who has not talked to any of her fellow prisoners yet, finally informs the others she has developed an instrument from the techno-organic suits that will allow them to escape.  Placing it into a light as a power source, it actually is a weapon which she uses to destroy Gregor, a Phalanx planted to watch them.  Monet then uses the opportunity to break through a side of the cell to get outside where the four find themselves on a boat, with still plenty of trouble to deal with, as shown in the next issue where Blink makes the ultimate sacrifice to save the group.