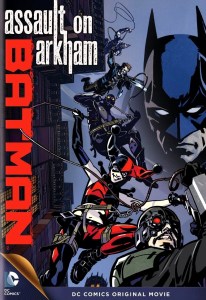 Let’s face it,  DC Comics knows how to put out a good animated film.  It does make you wonder why they can’t seem to put together a live action film that anyone can agree on; i.e. Man of Steel…sigh.

The DC Universe’s latest animated film has arrived, Batman: Assault on Arkham. It’s set in the Batman Arkham video game series. Strangely though, Batman is not the focus of the story-line. It’s more geared toward Amanda Waller’s Suicide Squad.  In this animated version the squad consists of Man Shark, Black Spider, KGBeast, Killer Frost, Captain Boomerang, Deadshot and Harley Quinn. The mission is to get the Riddler out of Arkham or they get their head blown off with a nano bomb that has been implanted at the neck.

I’ve been somewhat behind on my DC comics reading so I’m not sure if this tactic was used in the comics to keep the team under control, but it worked really well in ARROW  TV series. The Riddler has “dirt” on every member of the Squad.  In this universe he was a black ops member for Waller at some point in time in the past.  The Squad is called Suicide for a reason.

Deadshot and Captain Boomerang have been here before and try to fight for the leadership role.  Along the way Deadshot and Harley become, well, romantic, which is why there’s sexual content added to the rating. This also adds to tension in Arkham when they see the Joker inside. I never knew that there existed a love triangle between Harley, Deadshot,  and The Joker, but apparently in this universe there is. It creates a much darker tone in some spots but stays true to some events in the comics. Plus there’s a nice fight out with the Joker and Deadshot.

Now your asking yourself, “Why is this a Batman story?” Batman is on a mission of his own during the film.  The Joker has planted a bomb somewhere in Gotham and Batman is trying find it’s whereabouts. The Squad’s main concern is avoiding the bat all together. This is never the case of course and Batman gets his necessary screen time.

The animation is great. Lot’s of details and stays true to the design of the animated universe has been using over the last several installments. It shifted when we all got the New 52.  The best part of the whole thing is return of the voice talents of Kevin Conroy as Batman.  He is the voice of Batman, or at least the preferred choice. Troy Baker voices the Joker, which is a solid performance but,  I miss Mark Hamill.  The other voice talents are cast really well.  Andrea Romano always seems to cast the right voice for the part.

It’s a nice package overall. I recommend purchasing the Blu-ray/DVD+Digital so you can watch it whenever you want.  Some of the violence was a little harsher than what I would expect from DC, but it fits in this universe established in the games. I wouldn’t recommend this for anyone under 13, however. You’ll see in the first ten minutes why.

Like all the DC Universe releases it teases the next project, which is Justice League:  Throne of Atlantis. If Batman:  Assault on Arkham is your first time joining DC animation for some time, you should catch Justice League: Flashpoint and Justice League: War to help make the transition to the New 52 animation series style.