The magician supreme of the DC universe, Zatanna has always been a fan favorite of ours.  How can you not like a character that could beat the crap out of Superman with her magic, or mind wipe the world’s greatest detective, Batman?  It doesn’t hurt that she looks pretty damn good while doing it either.  Zatanna knows to be a great magician you must have good showmanship, which includes having the right look during your act.  Sure, she has had one costume that the very sight makes us cringe, which you’ll see below, but in general she has some great fashion sense.  Typically a magician never reveals their secrets, but we got access to Zatanna’s closet by saying the magic word nepo and have narrowed down her long list to our top five favorite costumes she has worn over the years.  Are you ready? 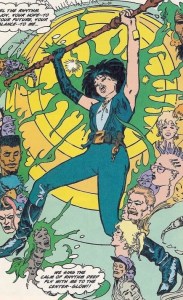 5.  90’s:  Zatanna’s 90’s garb does make her look a little more like one of the lost boys than a magician.  The Z on her belt is just a little extra flair to identify the character.  The one glove on, one off adds a bit of contrast that we like.  By no means would we want her to wear this again, but it’s still a good pick from her past. 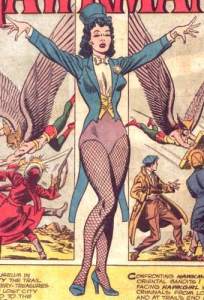 4.  Original:  The original costume has makes her look like a true magician, but there are two things we think are done better later.  The white dress shirt and yellow cummerbund is just a contrast we don’t love.  Yellow especially just does not look as good on Zatanna;  without it, it would have moved up on our list. 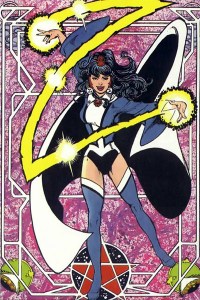 3.  70’s:  Taking our third spot is Zatanna’s second costume after joining the JLA.  Looking less like a magician, she definitely looks more like a super hero here than any of her other costumes.  The cape is addition that helps her achieve that.  We also like the combinations of colors, blue, black, and white, especially since the cape matches the actual suit. 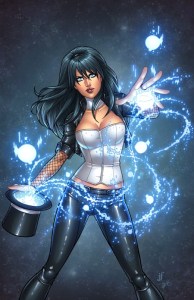 2.  JLA Dark:  Hailing as her most recent costume on the list is the one she wears in JLA Dark.  It takes her typical magician’s outfit and adds a bit more practicality to it.  She looks like she’s ready to get down to the business at hand than put on a show.  If nothing else, she’s ready for both.  She still manages to retain her fish-nets, except now on her arms.  The choker is a good match for her white corset, but in the end we prefer a bow tie. 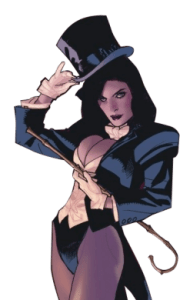 1.  Modern Corset:  Our top pick is easily her most well-known.  For most if you think of Zatanna, you think if this.  It is very similar to her original costume with the exception of the two things we didn’t like:  the white dress shirt and yellow cummerbund.  Losing both in favor for a single white corset is a small change, but makes all the difference.  She may not look completely like a super hero with this, but what does that matter when she’s the most bad-ass magician in comics?

Original Justice League:  We assume on the side while working with the Justice League, Zatanna must have been trying to hookup with Dracula.  What other reason would she have to wear this?  Perhaps an audition for an evil cartoon sorceress?  Is she a sorceress or ready to give a shot at being the black swan?  Look at her face.  We don’t even think she knows why she decided to wear that;  she is just as shocked as us!  Luckily it is an easy fix.  Hocus pocus, emutsoc siht nrub!

Biff to the Future #4 Capsule Review