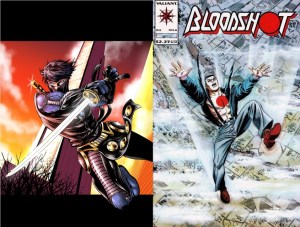 Everyone loves a good ninja.  Snake-Eyes and Raiden come to mind quickly for most of fandom, but neither characters have anything on Ninjak.  He first began kicking ass and taking names back in 1993.  After Acclaim bought his rights from Valiant Comics when they were going under, Acclaim themselves disappeared, giving Ninjak a six year retirement.  In 2012, Valiant Entertainment brought him back and now he can regularly be seen slicing and dicing once more.

In his original Valiant Comics background, Colin King comes from a wealthy background.  His father was one of the British Governments top spies.  He was raised in the Orient when his father was killed by a rival agent, Iwatsu.  Colin decided to remain in the Orient and train himself in ninjutsu so to continue his fathers work.  He posses a formidable fighting skill, the strength and speed of an Olympic athlete, and also happens to be one of the smartest men alive.  Beyond his swords and various other weapons, his suit is made of Kevlar and can change colors like a chameleon.

His first appearance in Bloodshot Vol. 1 #6 does not actually show Colin as Ninjak, and serves as a very mysterious issue where we can’t quite tell what angle he is playing.  Someone in the organization Weaponeer has been killing its former employees as they leave the company, using two assassins to do the deed.  The M.O. is that the former agent is killed on a passenger plane which is destroyed, as to look like an accident.  This leads is to our first look at Colin as he seemingly abducts an agent, for a purpose we do not know quite yet, who has just quit and is ready to board a passenger ship headed for Crete.  Meanwhile, as this is occurring, Bloodshot has been hired to investigate the deaths of the former Weaponeer’s by the British government. 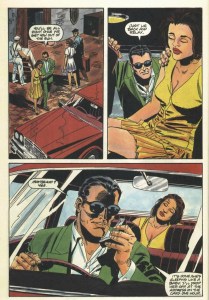 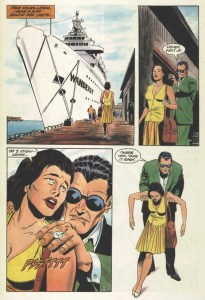 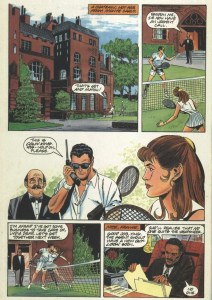 Both Colin and Bloodshot eventually find themselves on the same plane where the next murder is to take place.  Bloodshot is ready to stop the assassins on the plane from killing the former Weaponeer, but Colin has already switched places with the intended target.  Once the plane is in the air, one of the assassins comes towards his seat ready to strike, Colin injects him with something which causes the him to fall unconscious.  The second assassin sees this and panics, trying to flee, but sees what is transpiring and gives chase.  It is not until the next issue where more is revealed, including Colin as Ninjak. 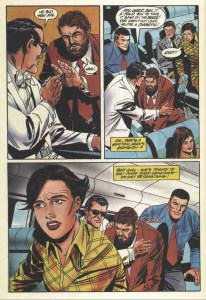