There is no better sidekick success story out there than Dick Grayson.  After having played second fiddle to Batman for so long, it could have been really tough for him to stand by himself as a competent hero.  Jason Todd and Damien Wayne both had to die to leave their Robin costumes behind, and Tim Drake didn’t get very far now going as Red Robin, not a huge change  Luckily he was able to ditch the Robin costume and name to become a new persona, Nightwing.  With his new mantle came a new wardrobe and Dick has had a few to choose from.  See the best of the best from the man who once was forced to were short-shorts nightly. 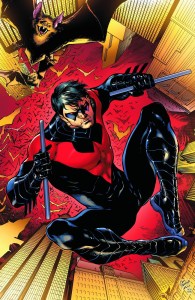 5.  New 52:  To begin with, I don’t dislike this costume.  In fact I really do like it; what I resent about it is the lack of imagination.  Dick Grayson came out of being Batman while Bruce was dead just to throw on a costume that looks very close to the Nightwing costume he wore before, except for a splash of red instead of blue.  He doesn’t need to be Batman because he is iconic enough as Nightwing, but coming out of that situation, you’d think they would give him something different to stand out more.  A ton of heroes came into the New 52 with a drastic costume change, so why does an amazing character like him get the shaft. 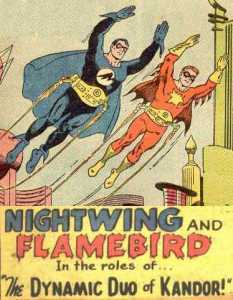 4.  Clark Kent as Nightwing:  Many people may not remember this costume.  It was a pre-crisis situation where Clark Kent and Jimmy Olsen were trapped in Kandor with Clark finding himself powerless.  Using Kryptonian lore, he became Nightwing to continue righting wrongs.  Even in post-crisis this gives Dick Grayson the inspiration to leave behind the Robin persona once and for all.  Plus this has a jet-belt, which I’m sure this would come in handy for Dick if he ever donned this.  He can skip the cape though; Nightwing doesn’t need a cape.  Maybe Dick could even put this on and convince Tim Drake to drop the Red Robin act and become his sidekick as Flamebird. 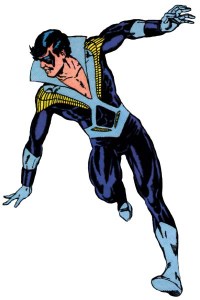 3.  Original:  It was a different time for Dick.  Anything had to be better than the Robin shorts and this is what he started his solo career with.  The upright collar is slightly distracting as well as the open chest.  At least Dick isn’t a hairy guy, having tufts of chest hair for villains to grab on to would hurt otherwise.  While by today’s standards it looks rather silly, it is the best homage he as worn for the flying Grayson’s.  It also marked him stepping out from under Batman’s shadow, and at least this look was different enough to distinguish himself. 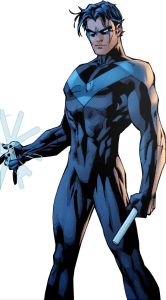 2.  Mid 90’s:  For me it was a tough choice between this costume and what ultimately I thought was his best costume.  This costume is awesome and as a hero the stalks the night, it is perfect.  A problem though is that it isn’t flashy and Dick Grayson is a little bit.  He is the lighter side of Batman and this doesn’t really show it. It was a great costume which is why it lasted to long, and in the end why the New 52 threads weren’t changed much.  It’s just a little to generic for such a strong character as Dick. 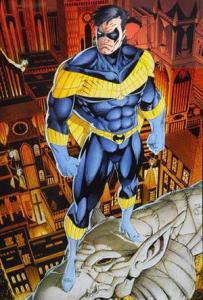 1.  Early 90’s:  My top choice use to be a costume that I disliked.  There are several things that make this his best costume though.  First, it’s as if he took his original and decided he had finally become a man.  It takes a lot of design elements from it but loses the collar and open chest which make it easier to take him seriously.  The complaint I had with the mid 90’s costume is also what I like here, it distinguishes Dick as his own man with a unique look.  Batman will always cast a long shadow over his former sidekick, but this costume shows that Dick is a hero in his own right.

Khaal: The Chronicles of the Galactic Emperor #1 Capsule Review