In our new weekly Sunday feature we are going to look at the different costumes that our favorite heroes and villains have in their closets; in comics and media.  To begin the feature I’m taking a look at one of my favorite DC heroes, Green Arrow.  The top five are the ones I think are the most cool or just notable.  We’re not covering every costume so feel free to discuss my choices or mention your favorite or even least favorite in the comments. 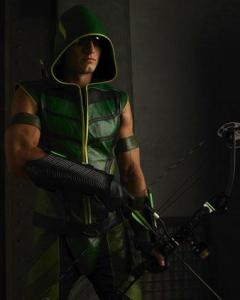 5.  Smallville:  I loved Smallville as a series; it made me fall in love with Superman, a character I could never quite enjoy before.  It had it’s share of problems for sure, but the problem in question here is costume design.  The Green Arrow fell prey to what I think all of the costumes on the show suffered from, way to bright of colors.  The bright green vinyl of the suite makes we wonder if he is going to fight crime or head out to a disco for a night of debauchery with Speedy and some speed.  Apparently during the day too, considering those sunglasses. 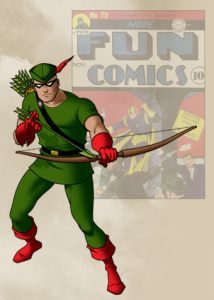 4.Golden Age:  The original is a very sleek costume, but how many times did that feather go flying out of his hat as he went roof top to roof top.  Secondly, how many robin’s did he kill to keep getting replacement feathers; I’m sure enough to terrify a young Dick Grayson.  While it’s not a bad design by any means, it does help perpetuate the comments from the uninformed that he is just a Robin Hood rip-off.  A little flair is needed. 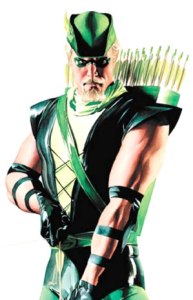 3.  Silver Age:  This design lasted for a long time and other variations kept a lot of this along with them.  It’s a nice design; it takes the Robin Hood type look but makes it Green Arrow’s own.  His arms must get cold on chilly nights in Star City, but it is more tactical for movement I’m sure.  Plus we get the beard.  Fear the beard! 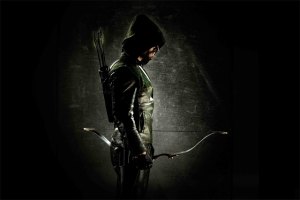 2. Arrow:  Just a few years later after the Smallville misstep we have this design that shows it to do it right realistically.  It’s not flashy, but it gets the job done.  It uses the hood with is better than the hat, and with recent developments (SPOILER possibly) he has the domino mask.  They just need a boxing glove arrow in that quiver to really finalize it for me. 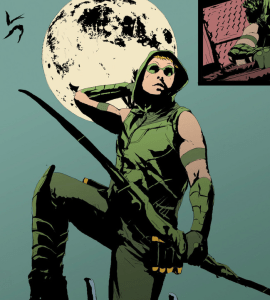 1.  New 52:  This is my favorite design of all, especially with Andrea Sorrentino currently drawing it.  The New 52 version of Green Arrow didn’t start off firing on all cylinders at the very beginning, but the costume is great.  It really looks like they were trying to go for the Arrow look, but it does have the nifty shin and arm guards, along with the sleeveless look of the silver age costume.  He needs to look his best to start hitting on the Black Canary again, he has a hole new relationship to recreate with her.