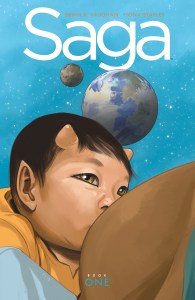 At SDCC this past weekend Saga co-creators Brian K. Vaughan and Fiona Staples announced that Saga would be collecting the first three paperbacks into a deluxe hardcover containing over 500 pages.  In talking of the new hardcover, Vaughan added:

“Saga is the story of Hazel, and each hardcover edition will feature her at a different stage of life in a new cover from co-creator Fiona Staples.  I have no idea how Staples will top this first one, which perfectly captures our heroine’s first few months in the universe. But we’re even more proud of what’s under the cover, 500 pages of story and never-before-seen extras, including a weirdly detailed creator roundtable about how the team makes a complete issue of our comic, from daydreaming to shipping.”

Just the day before, Saga received three Eisner awards for a Best Continuing Series Eisner, Best Writer for Vaughan, and Best Painter/Multimedia Artist for Staples. These are just additions to the numerous awards they have already won for Saga since its creation.

Make sure to pick up a copy of the deluxe hardcover for Saga when it releases November 25th of this year!