“You want to fight me, Baymax…you and all your friends had better be prepared to lose.”

Later this year we are beating treated with two upcoming Marvel films.  First in August we will have Guardians of the Galaxy, which itself is not as recognizable of a team as the Avengers.  Next, in November we have Big Hero 6, an animated film based off the Marvel comic of the same name and developed by Disney Animation.  Big Hero 6 is a super hero team created in a comic of the same name that even many hardcore Marvel fans have never read.  With a team of relatively unknown characters, we decided to take a look back at the first appearance of four of the team members who were all introduced in Sunfire & Big Hero 6 #1 two weeks ago and last week at Wasabi-No-Ginger introduced in Big Hero 6 %#1.  Now we are moving on to the final team member, Fredzilla introduced in Big Hero 6 #2.  His character was shown on the opening splash page of Big Hero 6 #1, but his actual first appearance came in the next issue for an actual introduction to the team and reader.

Just as with his teammate Wasabi-No-Ginger, Fred’s initial origins have mostly been kept in the dark.  The most that is know about him is the fact that he is Ainu but when he was young he spent part of his life growing up on a S.H.I.E.L.D. base.  His power allows him to create a powerful physical avatar that takes the shape of a giant dinosaur, or as many suggest, a form that looks like Godzilla, hence Fredzilla.  He can use it defensively for protection and offensively using its giant size and strength. 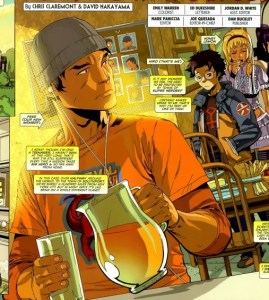 When we our first introduced to Fred, the team is meeting him for the first time while they are in New York for a special mission being led by Big Hero 6 founder, Furi Wamu.  They are to stop the theft of the last piece of an ancient artifact then when complete, could destroy the Earth.  GoGo Tomago and Honey Lemon decide to welcome him and test his abilities by picking a fight with him.  Things go a little to far as both GoGo and Fred lose their temper and really begin to fight.  The whole team is ensnared in the battle while trying to end it until Fred unleashes his dragon avatar and causes everyone to settle down. 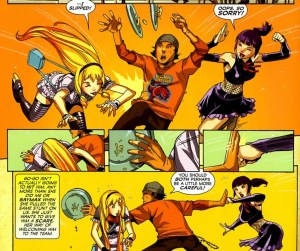 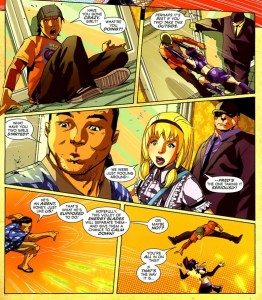 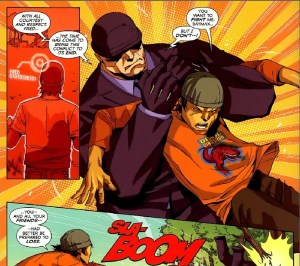 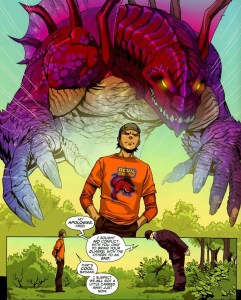 With everything settles down, the team goes to the local high school were they are pretending to be students as part of their undercover mission.  GoGo, Wasabi, and Honey, finding themselves board in the gym, decide to challenge the football team by getting the ball past their defensive line.  GoGo barrels past a majority of the team and launches the ball to Wasabi who nearly gets to the end of the court if not for Fred using his avatar to stop him, reasoning that while he is part of the team, being undercover he is also a student coach.  Fred convinces the rest of Big Hero 6 that they should join the football team while they are there which they all agree to, but without using their powers.  While having fun in their undercover roles, they have no idea that the villain and thief behind everything is secretly plotting their destruction. 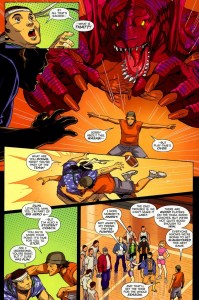