Long ago, God sent an elite selection of angels to watch over mankind.  These angels grew jealous of mankind over time and rebelled against God.  Angels still loyal to God subdued the fallen angels who were then cast out of heaven.  Their leader Semyaza was bound and chained, not to be released until Judgement Day.  Some of his fallen angels were able to escape down to heaven along with a piece of the chain that imprisoned their leader.  As lore had it, one day a firstborn would come of true blood angels, who would hold the stolen piece of chain to release evil on the world.  The fallen angels melted the chain into thirteen coins, only to be reunited when the firstborn was found.  So begins 13 Coins, a story pitting the Sons of Noah, a group formed by a warrior angel sent by God against the fallen angels with a man named John Pozner whose destiny is soon to be revealed. 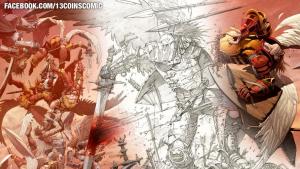 For an indie comic it does have some big name talent behind it.  First off the pair of Martin Brennan and Michael B. Jordan serve up the story.  While the names may not pop out in the comic world, they did the script for a little game called Hitman:  Absolution.  Then you have Simon Bisley on art duty, a legend in the comic industry having done most notably ABC Warriors, Lobo and Sláine.

You won’t find this comic on you local comic store, instead it is digital only from Corinthian.  It can be purchased from the App Store, Google Play, and Amazon Apps.  You download the app onto your device and then from there have your command center.  At the moment you can grab the first issue for free and then purchase the rest from there, along with exclusive packs with extra art and Bisley’s original pencils.

The story does have a lot of moving pieces but after the first issue finishes the setup, things start moving along at a nice pace.  If you like dark religious pieces especially, this is right up your alley.  The story can get dark and you’ll see some awesome action scenes where a lot of people die.  The you have John Pozner who begins as an unlikely hero who could save us all, or damn us.  I’m interested to see how his journey progresses through the next two issues.

The art is where it really shines though.  Bisley’s art it always great and here it is at its best.  The digital coloring by Ryan Brown is at times heavy over Bisley’s pencils, but I felt that it complemented it nicely, really made the art pop.  And pop it does, especially in some rather gruesome scenes that are pretty spectacular.  The covers are beautiful to begin with, but then you have the added benefit of a 3D graphic view where you can bend the cover left, right, up, and down to view the scene from different angles.

As of press, issue 1-4 are currently available and issue 5 is supposed to be released any time now.  It has a very intriguing story that has us wanting the next issue to see what will happen next as well as view more of that beautiful Bisley art.

If you are looking for some more information you can check out their official site 13coinscomic.com or check out some more art and videos on Twitter @13CoinsComic.  Check out the original trailer showing off the series below.

The Rocketeer: The Complete Adventures by Dave Stevens Review

The Top Ten Best Things In Comics From The 70’s