“I serve as a member of your team out of duty to my homeland — but by training and choice, I am a chef.”

Later this year we are beating treated with two upcoming Marvel films.  First in August we will have Guardians of the Galaxy, which itself is not as recognizable of a team as the Avengers.  Next, in November we have Big Hero 6, an animated film based off the Marvel comic of the same name and developed by Disney Animation.  Big Hero 6 is a super hero team created in a comic of the same name that even many hardcore Marvel fans have never read.  With a team of relatively unknown characters, we decided to take a look back at the first appearance of four of the team members who were all introduced in Sunfire & Big Hero 6 #1 last week.  Now we are moving on to the next team member, Wasabi-No-Ginger, introduced ten years later when the team returned in a brand new mini series, Big Hero 6 #1.  While the film has changed the character’s appearance, he otherwise is the same character. 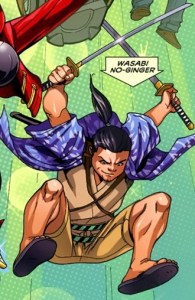 Beyond his initial appearance in the second Big Hero 6 mini series, Wasabi-No-Ginger has practically been a no-show in the Marvel universe.  This makes his origins much more shrouded than his other teammates.  He is a chef by trade, mainly creating sushi dishes.  However, the Japanese government recruits him for Big Hero 6 due to other skills.  Wasabi is skilled in hand-to-hand combat and sword fighting, but also has a unique gift.  He can use his Qi to create energy blades which he typically manifests into throwing knives.  The blades are non-lethal, but can still be used effectively in combat, such as rendering an opponent unconscious when one pierces their skull.

When he is first introduced in Big Hero 6 #1, GoGo Tomago and Honey Lemon meet Wasabi at Big Hero 6’s headquarters in downtown Tokoyo.  He is fresh to the team, so unbeknownst to him, a training exercise engages with agents attacking.  The two senior members step back and watch Wasabi in action and our very impressed with his skills. 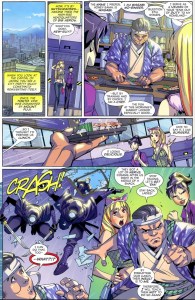 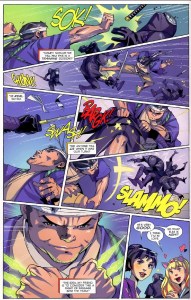 Meanwhile, without warning a team of three super villains, Whiplash, Gunsmith, and Brute, attack the Tesuka Advanced Science Institute where Hiro goes to school.  With Hiro trapped in school, Baymax transforms into his attack form and engages the three.  Wasabi, GoGo, and Honey see the reports at headquarters and rush to Baymax’s aid.  With Baymax and GoGo engaged with the villain Whiplash, Wasabi attacks Gunsmith.  Using his Qi-blades, he hurtles them through the air, destroying all of Gunsmith’s bullets that he fires at him.  With his enemy out of ammo, Wasabi throws a blade at Gunsmith’s head, rendering the villain unconscious. 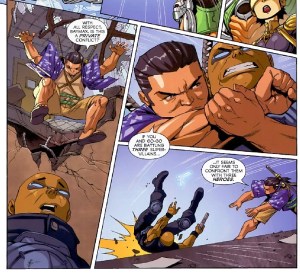 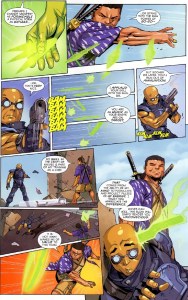 With Gunsmith down, the perspective cuts back and the others have finished fighting.  Somehow all three villains teleported away without a trace.  The team regroups and enters their transport plane, sans Hiro who must stay at school.  When Hiro finally is able to go home and retrace the battle, he is contacted by Furi who tells him she is the Operational Head of the Exotic Assets Division of Homeland Security, who also happened to have created Big Hero 6.  She explains that their have been thefts of ancient artifacts that when all combined, will bring immeasurable damage to the Earth.  The team is put on the case to reclaim the artifacts and save the world.  This is continued into the Big Hero 6 #2 however, where we meet the last member of Big Hero 6, Fred.