Peter Quill’s star power has been rising fast in the last decade. Even though he was created in the 70’s, it was not until the Annihilation wave threatened the universe that he was pulled back into the thick of the Marvel universe to defend it from any space danger there might come.  Now he leads the Guardians of the Galaxy in the comics and is getting a starring role in a film with his team.  Since until recently Peter has not been a major star himself, his wardrobe was a little light compared to other Marvel heroes.  Hence, this week we will be passing on including a dishonorable mention for the hero;  all of his clothe are safe from our righteous fire for now.  What he has worn over the years has been impressive, making a decision for him was tough.  In the end we have finished our sorting and pulled and ordered his five best costumes.  Before you go to see the film very shortly, take a look back with us as what this protector of the galaxy has worn.

5.  Original:  Peter’s original costume is what he wore through a majority of his career up until rather recently.  The costume itself is fairly standard with only the white stripes oh his chest and upper arms connecting.  The yellow gloves are plain, which should have at least been done like the boots, which we did like, as the yellow bursts out like a star.  The helmet is fairly standard to what he used later on, but the goggles are a little much.  They make him look more like a state trooper ready to dish out some serious speeding tickets than save the galaxy.  The belt however is one of the better parts of the costume, especially with using the star as the belt buckle. 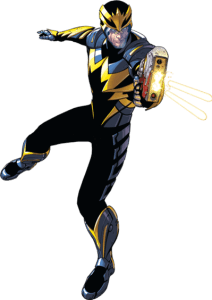 4.  Marvel Now:  While just before as we had some complaints of his original costume being a little to plain, this is a little to busy.  There are just to many sharp edges every where that don’t really seem to tie into the character very well.  It almost looks like a better costume for Elektro than Star-Lord.  The helmet is the best feature of the costume; we like the classic helmet, but think the visor is a nice touch, especially compared to the goggles.  For more of a battle costume, it works for its purpose, but could have been touched up a bit. 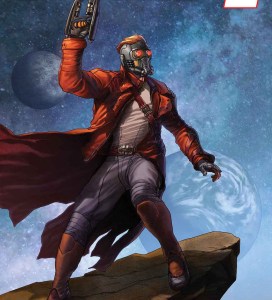 3.  Movie:  In the now normal case of the movie affecting the comics, this new costume will be seen in the film and the upcoming comics The Legendary Star-Lord.  We like that he uses his mask here as it is so unique and interesting.  The trench-coat is a nice touch to give him just a slight more roguish, Han Solo look.  Just by looking at him you can tell he’s off to go find some trouble.  The only complaint we have, even though it most likely was intended this way, it really doesn’t scream super hero. 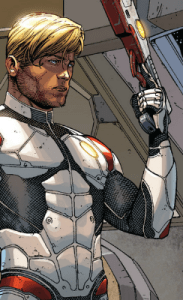 2.  Marvel Now Space Gear:  Our last complaint fits for this costume as well;  it doesn’t scream super hero.  What it does have going for it in the bigger picture is that it ties in better for a unified team look with the rest of the Guardians (besides Groot since being a tree, he gets to run around naked.)  It has a great mix of science fiction and real life astronaut to it which works well for him.  A little splash of blue in the mesh would not have hurt to tie into his original costumes, but overall it is very sleek. 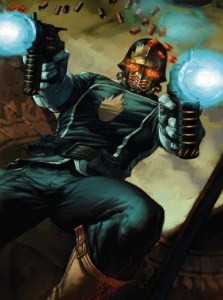 1.  Annihilation:  This costume easily topped our list with little hesitance.  It brought us his now iconic mask that we love.  It is just fascinating to look at, even if with the helmet is reminds us of certain soldiers you would fight in Wolfenstein, especially with the cool, but semi creepy glowing eyes.  The jacket is fairly simple, but we love the star burst right in the middle.  The boots give him still a down to Earth attitude though.  It does make him look like a soldier, but at the same time a soldier that is protecting us far far away in space as the Star-Lord.

The Wicked + The Divine #18 Capsule Review