“Sorry master Hiro…but you know better than anyone else that — first and foremost I was designed to both serve and protect you.”

“Me?  I think it would have been fun to show up after the soft gushy parts started flying across the room.”

“Actually… I happen to have a radioactive dampening blanket.”

Later this year we are beating treated with two upcoming Marvel films.  First in August we will have Guardians of the Galaxy, which itself is not as recognizable of a team as the Avengers.  Next, in November we have Big Hero 6, an animated film based off the Marvel comic of the same name and developed by Disney Animation.  Big Hero 6 is a super hero team created in a comic of the same name that even many hardcore Marvel fans have never read.  With a team of relatively unknown characters, we decided to take a look back at the first appearance of four of the team members who were all introduced in Sunfire & Big Hero 6 #1.

The brains of the team are provided by Hiro Takachiho, or Hamada as his last name has been changed to in the film.  Hiro actually does not technically have any super powers himself.  He is though a 13 year old boy whose intellect could rival that of Reed Richards or Tony Stark.  He is a brilliant inventor who created his best friend and sidekick, Baymax.

Baymax was created by Hiro to be his bodyguard, personal assistant, and butler.  However, Hiro’s father passed away while Baymax was being created, so Hiro transplanted his fathers thoughts and emotions into his creation.  With this, Baymax acts as a father figure and best friend to Hiro.  Baymax has amazing strength and speed being a robot, but is also a synthformer, so he can change his shape and appearance.

Leiko Tanaka, aka GoGo Tomago, is typically considered the hothead of the group.  At a young age she fell into a youth motorcycle gang that had connections with the yakuza.  At 18, she was arrested in connection with her gangs activity and sentence to five years in prison. Fate had other plans with her motorcycle skills and good behavior in prison.  Japan’s Ministry of Defense offered her early parole in exchange for test piloting a a new experimental exosuit named GoGo Tomago.  The suit allows her to absorb kinetic energy which can be channeled into near invulnerability, flight, and energy blasts.  It also allows her to roll up into a sphere to propel forth, gaining energy from ricochets until her intended final impact, hitting with explosive forth.  The suit is voice activated, so she must say GoGo Tomago to use its powers.

The final team member originally introduced is Aiko Miyazaki, aka Honey Lemon.  She attended the Tokyo University of Science when she was approached by Japan’s top intelligence agency, Naikaku J?h? Ch?sashitsu, also referred to as Naich?.  She was placed into a top research team to design new weapons for the government.  The most groundbreaking invention they made were small groups of wormholes that traveled through time and space.  Under Aiko’s suggestion, the technology was put into a purse which she utilizes in battle.  She uses Pym particles to shrink any items she wishes and then places them into a pocket dimension which she is able to pull out from her purse and resize on the fly.  Being a secret agent, she also has learned several forms of martial arts.

Hiro has a somewhat normal life, living with his mother and attending school while being watched over by Baymax.  One day while walking to school, he sees a beautiful woman, Honey Lemon, watching him from afar, but he thinks nothing of it.  In class, he is summoned to the superintendents office where the Silver Samurai is waiting for him.  Initially believing the Silver Samurai is there to cause him harm, he comes to find out that he is there in an attempt to recruit him for the government to work as part of Big Hero 6.  He finds out his mother was already asked if he could join and had said no, so he refuses as well.

Back at home, Hiro’s idol is Sunspot, who had not been seen for quite sometime.  In hoping to find his hero, he created a device to track Sunspots power reading.  The device finally narrows in on Sunspot, so Hiro and Baymax set off to find him. Meanwhile, back at Big Hero 6’s headquarters with GoGo Tomago and Honey Lemon, the Silver Samurai reports that Hiro has refused to join the team.  Their government handler will not accept a refusal and tells the Silver Samurai he must go back and try to change Hiro’s mind. 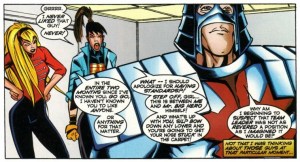 Hiro an Baymax arrive at the source of his machines readings, an abandoned monastery.  There they find Sunspot, dying from radiation poisoning and wishing to be alone.  Hiro insists on trying to help cure him, but Sunspot tells him there is no cure.  As Hiro approaches, Sunspots powers inadvertently flare up causing Baymax to change into his attack form, fearing for his friend’s safety.  As Hiro tries to stop the two from fighting, Big Hero 6 arrives after tracking him.  Thinking Hiro could be in danger as Sunspot has recently been viewed as a criminal to his government, GoGo Tomago uses her suit to fly at him and drag him away.  Lemon Honey pulls out a radioactive dampening blanket to contain Sunspots powers.

Sunspot is able to use his powers to to destroy the blanket, but does not wish to fight.  Hiro begs Sunspot to go with him and Big Hero 6 in hopes that they may find a cure for what is killing him.  While he insists there is nothing to be done, he agrees to go with them as he has been stripped of everything, his honor, family, and country.

With everything wrapped up, Hiro and Baymax return home.  The two talk discuss the events of what had happened, but notice that something is wrong.  Inside they find a villain calling himself Everwraith and what looks as though his mother has been killed.  Everwraith tells him he knows that Big Hero 6 had approached him for recruitment, but he was now going to work for him, as the issue comes to a close.