The CW has announced you will be able to bring Arrow Season 2 home September 16th in a dual Blu-Ray combo pack and DVD.  The Blu-Ray combo pack will contain 4 Blu-ray discs, 5 DVD discs, and an UltraViolet copy of all 23 episodes from season two.  You can check out the full features included on Blu-Ray and DVD below.

• Three new featurettes:
• “From Vigilante to Hero” – Documentary highlighting Oliver Queen’s journey from fighting injustices to becoming Starling City’s resident savior.
• “How Did They Do That?! The Visual Effects of Arrow” – Explores how Season 2 has raised the bar for action and effects, showing how the creators can make anything the writers dream up come to life.
• “Wirework: The Impossible Moves of Arrow” – See how the intense and elaborate fight sequences are shot for maximum realism!
• “Arrow 2013? Comic Con Panel
• Deleted Scenes
• Gag Reel 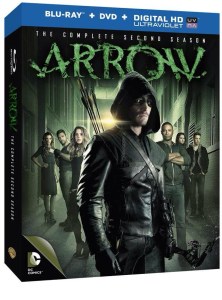