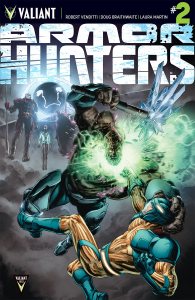 Last issue the Armor Hunters thought devastating the most populated city would change the USA’s mind on giving them Aric.  They still will not budge nor negotiate, so the Armor Hunters decide it is time to begin disinfecting the places Aric has visited by releasing their hounds.  The hounds themselves are brutal, but not as much as Aric as he rips them apart when they attack his people.  The art is magnificent.  Braithwaite is called on for some spectacular action scenes and he delivers in full.  Watching the eyeballs in soldiers heads is extremely graphic, but continues to show how powerful the threat is.  So far we’ve been given a chance to see most of the team join in on the fight now, with the exception of the newly recruited Bloodshot.  However, if the last page is any indication, we’re in for a treat in that regard. 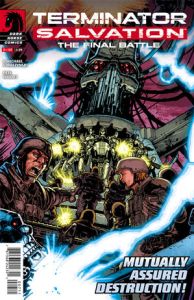 J. Michael Straczynski continues to make this series a must read, even with it being a sequel to a film that by most standards was not very good.  Marcus Wright is back, with a quick explanation of how that actually makes sense, while informing John of why Skynet has reactivated him.  It all revolves around Thomas Parnell, who the humans and Skynet must now join forces to take down before everything is destroyed.  Mostly this issue felt like a calm before the storm.  Parnell is ready to take down the resistance which should make for some bloody enjoyment to come, but it is a fun twist to see Skynet actually needing human help before it is overwhelmed by Parnell.  Bringing Marcus back serves two purposes, to feed the fans of the film but also to provide the best link two join the two enemies.  While I could have cared less for him in the film, bringing him back feels natural and needed. 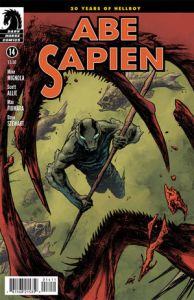 Abe continues his bizarre journey with his new traveling companion, Grace.  Both have dreams pertaining to their state of mind;  Abe talks to Hellboy discussing his fears of what he’s changed into, while Grace sees her family along with nightmares of what was done to her.  While not a bad issue, there was not enough compelling to give it a solid recommendation.  It was entertaining to see Abe and Hellboy together again, even if it was just a dream sequence.  It’s time for the pit stops to finish, and Abe finally arrive to what he’s searching for. 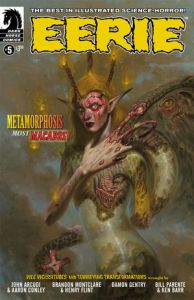 Eerie brings us three new horror stories, in which all three lack any terrifying qualities.  The first tale follows a botanist who grows a prehistoric mushroom which when she eats it, transforms her into a giant monster as she believes she has just become young once more.  The biggest problem with is is the art which is a little to busy, making it hard to distinguish what is actually going on.  The next story follows a Godzilla monster actor who is being replaced by CGI until an accident makes him grow to a monstrous size.  He tries to show everyone that he can still be scary, but quickly learns he as shown the world how to kill a giant monster in his films.  It is actually an enjoyable story, but it suffers from ending way to quickly.  The final story, and easily the best, actually has no horror elements at all.  A gnome wishes to become knighted, even though no one believes he should be.  He is given the task to rescue a sorceresses, something that the king and other knights believe he will die attempting.  He surprises everyone though, and completes his mission.  It was an enjoyable short story and the art fit perfectly, but it is a wonder how it ties in with the horror theme of the anthology. 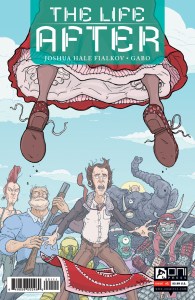 The series was described as what if Hunter S Thompson had written Hitchhiker’s Guide To The Galaxy.  While I found nothing that made me think any of that was related, it still looks to be an interesting series.  The main character is stuck in an endless loop, living a monotonous life with the same routine.  One day on the bus when a woman drops her handkerchief as she always does, he decides to finally pick it up and run after her with it.  That’s when the world starts to change and he sees a terrible wrong done to her long ago.  The story so far has a much bigger Matrix feel with a more upfront religious setting.  We still really don’t know much about the main character, as he feels more like a prop to propel the story, but the story alone is pretty fascinating.  An interesting start, I’m very interested to see where it goes. 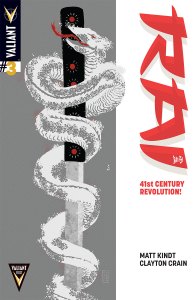 After being blown up, Rai proves he will not be killed so easily as he re-materializes and starts slicing and dicing immediately.  The issue is action packed as he cuts his way through wave after wave of Raddies to find out who is behind the chaos.  The connection between the mastermind and himself are much deeper than he could have ever imagined as they finally come face to face.  Things continue full speed ahead, but the pace is very fulfilling and never feels rushed.  We’re finding out much more about Rai’s origins, but at the same time the issue is full of some great action that Crain brings to life.  More questions get raised in the end, but unlike a mistake you can commonly find in many comics, we’re getting answers too. 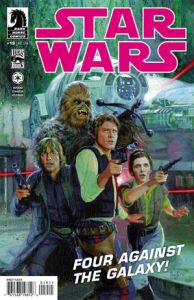 With the events on Archon behind them, Leia cannot forget them.  When a childhood friend that has been a spy for the rebellion sends a distress signal for Leia’s help, her and the gang set off to the rescue by themselves.  It won’t be easy though, as the feared robot bounty hunter IG-88 is on her friends trail.  Any time I get to see IG-88 I’m thrilled, as he has always been a favorite character of mine.  Otherwise the issue was fairly standard, and should serve as a good two-part breather from the last larger arc. 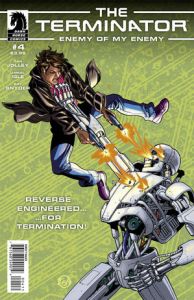 Greene and the Terminator now teamed up begin their assault on the facility were Dr. Fong is obtained.  The issues is almost complete action as numerous guards make the mistake of facing off against a Terminator.  Having a killer robot from the future on your side does not guarantee success when you’re facing killer robots from the present.  The action stretches on a little to long though, and stops the story from really progressing forward.  Igle’s art does a great job of keeping the issue enjoyable, it just would have been nice to see the story move forward a little more. 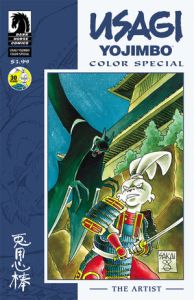 This is actually does not have any new content.  Instead, it features four short stories that have previously been released in different anthologies.  With that in mind, if you have not read any of the stories previously, it is actually a great collection that shows off a diverse selection of Usagi Yojimbo tales.  It is hard to pick a favorite as they are all great, but Buntori was the standout for me as Usagi witnesses the battle between two fallen warriors.  If you have not read the series before and don’t know where to start, this is a great purchase to jump in. 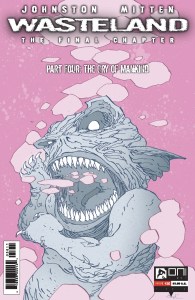 With the end of Wasteland in sight, we seem to have finally arrived at the event that led to the destruction of the planet.  That event was screaming babies?  That’s not quite true, but it at least signals the start of the catalyst.  Jumping back and forth between the present and the past can be a little jarring, especially when the main focus is the past at the moment. Either way it is interesting to finally see everything fall into place. 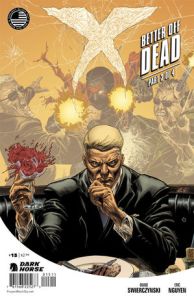 X was feeling good being back on the streets after his capture and torture.  He felt he was ready for the newest threat that seemed to be creeping over his city, the Archon.  Unfortunately that does not appear to be the case.  His new enemy seemingly stands revealed while taking control of Tango and his men.  Last issue X had the drop and took out both sides.  This time even having the drop on them is not enough as he is completely outmatched.  You can never be disappointed by the amount of blood going into X as red flows freely in this issue, from Tango being poisoned to X’s stand.  If you have a dark sense of humor, you can also find little pieces of enjoyment from X getting his starving prisoner to talk by offering him dog food.  X is the best kind of fun, gritty, dark, and bloody, leaving you wanting more.