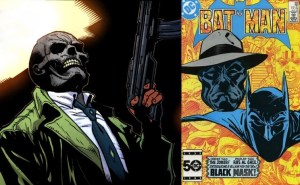 “Know that the mask itself retains the spirit power of the material from which it was made!  Know that the wearer becomes the mask!”

Roman Sionis had a life much like that of Bruce Wayne. He grew up in Gotham to wealthy parents, who were even friends with the Waynes.  However, instead of having his parents killed when he was younger and waging a crusade against Gotham criminals like Bruce, Roman killed his own parents and eventually became the boss of Gotham’s underworld.  He has been a thorn in Batman’s side since the mid 80’s when he was first introduced in Batman #386.  Here he was first introduced with his entire origin explained. 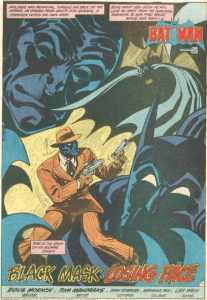 The issue begins at Roman’s birth, as the doctor drops him.  While he was not injured, it was said there was something in his eyes.  Leaping forward, we are shown him as a young boy as his parent’s entertained the Wayne’s.  He noticed his parents put on different “masks” when talking to them and hated the Wayne’s along with his parents fake personalities around them.  Later down the line, his parent’s took him to their vacation home in the North Woods.  Well by himself out in the woods, he encounters a rabid racoon that bit him.  His parent’s bring the best doctor’s in to treat him, but again they feel something is not “right” about him. 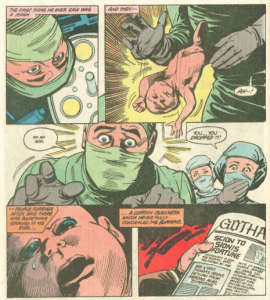 Again the issue moves forward and we find Roman now a man.  His father brings him into his company, Janus Cosmetics, in a low level position, but Roman quickly rises and becomes Vice President.  Here he meets Circe, a model applying for a job at the company.  He falls in love with her and tells his parents of his wish to marry her.  Scoffing at the idea of him being with a common model, they refuse to allow the marriage.  Enraged, he laid wait until summer and then killed his parents in a house fire. 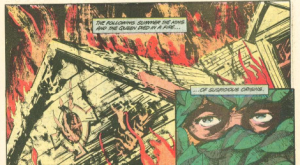 With his parents out of the picture, he continues his relationship with Circe and becomes president of Janus.  He also begins collecting masks as he felt surrounded by them his entire life.  Inspired by them, he decides to put out a brand new cosmetic line that features the makeup elaborately as more of a mask then highlighting the face itself.  The executives in his company tried to dissuade him, but he launched the line anyways to an extremely disappointing result.

Needing a quick turn around, Roman offers a reward to anyone in his company who comes up with the next great makeup.  One of the company scientists comes up with a water insoluble makeup.  He warns though, that the makeup bonds with the skin and the bonding agent needs to be tested further before putting it out for production.  Needing to erase his initial mistake, Roman fires the scientist and puts the makeup out without testing.  It is a success initially, but it begins to have adverse side effects with rashes.  It brings numerous lawsuits aimed at Janus, ruining his company.  As everything falls around him, Circe tells him she is leaving him to make things worse.

Finding no bank to fund Janus, Roman’s only option is the Wayne Foundation.  Lucius Fox tells him the Wayne Foundation will fund the company, but appoint a new board of directors to run Janus, effectively boxing Roman out.  With nothing left, Roman goes to the crypt containing his parent’s corpses, blaming them for his downfall.  As he tries to open the crypt door, a bolt of lightning strikes the door, sending him hurling back.  He takes the lightning as a sign of his rebirth and enters, breaking open his father’s ebony coffin.  Finding his father finally without a “mask”, as the fire had burning away his face, he decides to use the wood he ripped from the coffin to create a mask for himself.  With this, he retrieves his money and masks and leaves his old life behind. 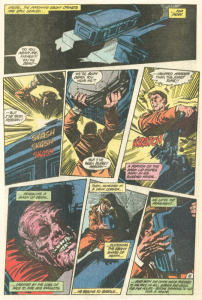 He begins hiring criminals into a new gang that he begins running as the Black Mask.  He gives everyone who joins a new mask to transform them into someone else.  His first point of action is to murder the new president of Janus Cosmetics.  He uses a concentrated dose of the water insoluble makeup to bond a mask to the new presidents face which kills him, and also serves to call out that Roman was behind it.  With Batman now on his trail, Roman decides before he confronts the caped crusader, the next person in his sights is Bruce Wayne.  That story is left to be continued in the next issue of Batman, but with their rivalry continuing to build and grow to this day. 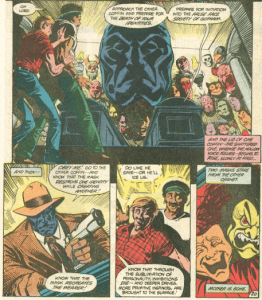 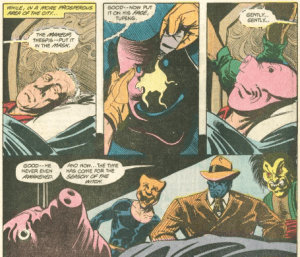