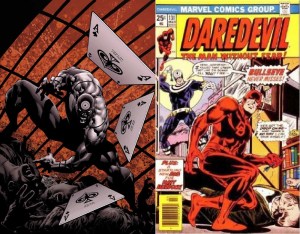 Daredevil had the short end of the stick when it came to notable villains in his early days.  The Amazing Spider-Man introduced a majority of Spider-Man’s most famous villains within the first 50 issues or so.  For an average person off the street, usually the two most notable Daredevil villains are going to the Kingpin and Bullseye.  The Kingpin was created in the Amazing Spider-Man #50, never even appearing in Daredevil until many years later during Frank Miller’s run, and Bullseye was a creation from Marv Wolfman and John Romita, Sr. in Daredevil issue #131.  Bullseye has quickly risen to notoriety for many reasons, including killing two of Matt Murdock’s leading ladies, Elektra and Karen Page.  In Daredevil:  The End he even gets the pleasure of killing Murdock.  Going by his first appearance, his character would love this fame;  all good mercs just want to have fun, well and be recognized.

In the issue, to prove his amazing skills, he sends a paper airplane note crashing through a window, demanding $100,000 from a business man.  After the man has read the note, Bullseye appears out of nowhere in the office and demands the money immediately.  Unfortunately for the man he doesn’t have the money on him (who carries that much money anyways), so down he goes with a pen flung into his neck for a killing blow.  Not only does Bullseye have incredible aim, he has incredibly little patience.

Later while the police are investigating the crime scene, Daredevil swoops in to give his expert help and runs into a Daily Bugle reporter claiming to have the skinny on Bullseye origin.  According to this, Bullseye was a soldier in Vietnam who received a contract with the MLB before war broke out but he enlisted before he could play.  Enjoying the killing, he realized that he could kill men with his aim, and whatever he could grab.  Out of the war, he became a mercenary, one with a need for the fame and notoriety.  Killing the business man was just a way to get the publicity, and what better publicity is there than killing Daredevil?

As Daredevil swings away, Bullseye strikes, and everything is a weapon for him.  He hurls a grenade, literal garbage, and a rope at Daredevil during the fight.  Killing Daredevil with no audience is not what he wants, so he lures the hero to the circus so their fight can take center stage.  Cue the end until next issue.

His abilities really haven’t changed since this issue (unless you consider his new ability of being paralyzed currently as an ability.)  He throws amazingly well and never misses except when Daredevil is there to stop him.  His costume hasn’t changed much except for some minor adjustments either.  His original look is great, but it does help that the Bullseye on his mask has been reduced in size.  (And no, he isn’t Irish if you only have the movie to go by.)  The only knock I have is that he is a little too much of a prima donna in this issue; I know a merc has to make a name for themselves, but slow down a tad.  Beyond the fact that everyone loves a good mercenary in general, Bullseye came to the comic with a cool ability and a competent costume, so it doesn’t surprise me that he rose to become one of Daredevil’s greatest nemesis.

The Top Ten Things We Want In Daredevil Season 2