Spider-Man has numerous well known villains in his rogues gallery and every few years they all get a new costume that they hope will give them an edge over our favorite webhead.  The Scorpion is no exception here; he gets upgraded armor and a deadly new stinger in each redesign.  Mac Gargan even got a brand new living suit, becoming Venom for a period (a suit for which we decided not to include on this list as it’s a living symbiote, to be politically correct.)   Being one of our favorite Spider-Man villains out there, we scoured his dresser to find what was there and picked what we believe are his top five costumes from several deadly choices.  Spoiler, they all have a deadly tail attached! 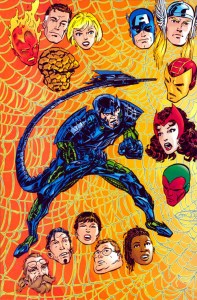 5.  Amazing Spider-Man Vol. 2:  Part of me hates this costume and part of me like it.  The part that hates it wants to beat the other part.  Even the faces surrounding him are in shock;  the Vision just looks disappointed.  It did make number 5 for me for a couple reasons.  John Byrne designed it and that alone raises its standing.  Also, this is one of the most different suits Scorpion has worn which should count for something.  They almost erase all green from it and they lose the mask; its not like his identity is a secret anyways.  I don’t know why he almost looks like a samurai though, that still confuses me.  Perhaps we’re just missing one of those great lost years stories featuring the Scorpion and Silver Samurai together, drunk during a night on the town full of wonderful shenanigans and got costume components mixed up. 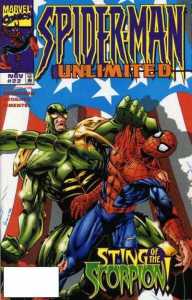 4.  Spider-Man Unlimited:  I’m not much for Scorpion being way to armored up, but this one just makes it under that thin line for me, unlike the Big Time costume that made him look to mecha for his own good.  I like that the tail is more segmented than any other design.  The con is that he is a little to buff, this sad period where apparently he had a little to many steroids and had some serious roid rage going on.  I’m sure he was happy to see his neck again after he stopped popping.  Unfortunately this will stop him from getting enough votes for the Villains Hall of Fame I’d imagine. 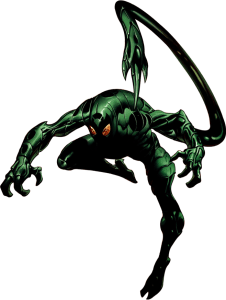 3.  Ultimate:   While this may not be Mac Gargan under the suit it is still a great design.  More than any of the other costumes, this one looks the most scorpion like with the hump back and claws.  The tail is scarier looking then any other version out there as well.  Plus this is much better than what Maximus Gargan actually looked like in the Ultimate universe. 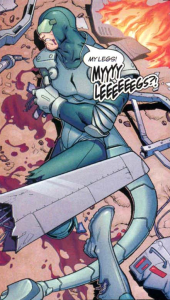 2.  Exiles:  For a costume that you really only see him in after he’s missing an arm and two legs, I actually like it.  The visor is a nice touch and the suit still complements his abilities by not being to overbearing.  It looks light enough for him still to be agile and strong, but offers protection with the body armor piece his tail is attached to.  I suppose it would have been helpful for him in this instance to have more body armor on all extremities; maybe he’d still have more limbs and be alive.  In any case it was a shame that this costume only popped up in one reality where he was required to be killed by Magic after only a few pages of being show.  RIP. 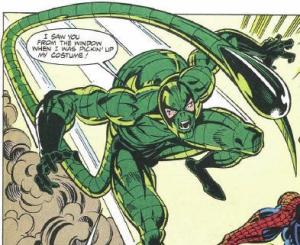 1.  Original:  What can I say, I love the original.  To many of Scorpions redesigns just get overly complicated and lose what I love about the character.  Like Spider-Man, he doesn’t really need excessive body armor or gadgets to ratchet up.  This costume is smooth and deadly; all he needs is his enhanced strength and tail to go toe to toe with Spidey.  While it has had a few tweaks from first appearance through the 90’s, it largely remained the same.  It truly shows him for what he is, a scorpion you don’t want to mess with.

Sin City: A Dame To Kill For Review – danielcelabu