“When the hard-skins took me from my home, I could not make them die–but with this new skin, I can!”

Back in the 90’s, X-O Manowar released during the height of the comic book craze.  The series sold like hotcakes to fans and speculators until the crash occurred and the series was eventually canceled due to low sales as Valiant Comics began to fold.  In came Acclaim to the rescue to to restart X-O Manowar, for a very brief period before Acclaim went under too.  Flash forward to today, and like a phoenix rising from the ashes, Valiant Entertainment has arisen, reviving the old Valiant Comic characters.  The old series were good, but now they’re better than ever.  This includes the focus of this week, Aric Dacia, aka X-O Manowar.

Aric of Dacia was a barbarian who was heir to the throne of his people, the Visigoth, in the fifth century.  He leads a life waged in war with the Romans until an alien race known as the Vine came to Earth and abducted him and other Visigoth.  They were used for slaves, with their lives passing for 1,500 years longer than those on Earth due to time dilation.  Given a map to a special suit of armor, Aric revolted against his captors and found the X-O Manowar armor, a sentient armor named Shanhara, which gives him incredible powers, such as strength, speed, and flight.  It was in X-O Manowar #1 where he made his first appearance and obtained the armor.

When we first meet Aric , he is in the mist of his escape, killing any Vine that gets in his way.  He follows a map that he was given to the chamber where the X-O Manowar was being kept.  He grabs a ring next to the armor to utilize it as he was told.  At first he discards the suit as useless, but as Vine come charging into the room, he puts it on, and quickly finds that it is much more powerful than he thought.  He blasts a hole through the space station and instinctively knows to go for the propulsion and knock it out, destroying the entire station. 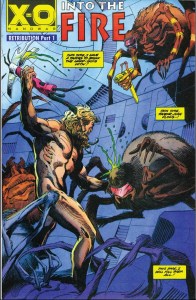 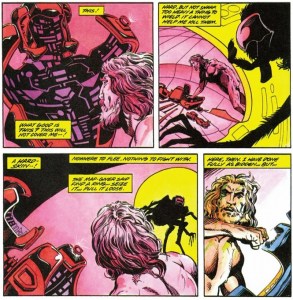 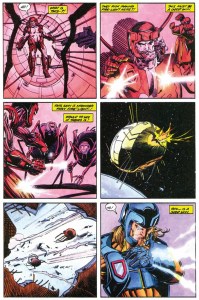 The blast propels him back to Earth, specifically Peru.  Not wanting to be weighed down by the armor, he takes it off and leaves to find where he is.  At this point he does not know that so much times has passed on Earth or how things have changed since he has been away.  Going back to his ways of taking what he wants, he claims food from a nearby village.  Much to his surprise, the villagers do not try to fight him, and instead offer him more food.  He slowly grows a bond with them, not realizing that the Vine are not done with him, wanting the ring and the X-O Manowar back.

He eventually leaves the village for a bigger nearby city, hoping that a wizard there will understand him and tell him where he is so that he can get back to his people.  While there, one of the children from the village that took care of him runs to him for help.  He goes back to find everyone dead, the Vine having killed them in search for the armor.  On one of the bodies, he finds a recorder the Vine left which speaks to him in his language, telling him they have the armor and want him to leave the ring.  Angry, he realizes the ring is connected to the armor and asks it where his former captors are.  In reply, it tells him to go north.  On his way, he finds the remnants of the Vine in the area that murdered the villagers and kills them before continuing on.

In the next big city he arrives to, he continues his search for a wizard and is attacked by a single Vine.  He kills it in front of who he believes to be a wizard, Ken, but not before being slightly injured.  Ken helps Aric out with his injury and agrees to help him north.  Unbeknownst to Aric, Ken has been hired to bring him to the Vine in the USA for an ambush. 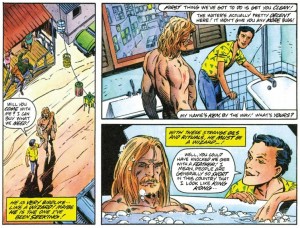 On their travel together, Ken grows fond of Aric, and right as he brings Aric to the Vine, he changes his mind and tries to warn him away.  It is to late, however, and Ken is injured while Aric tries to fight them off himself.  A gas truck behind him explodes, sending debris down on him.  Trapped he decides that if the armor can call to him, maybe he can call to it.  Demanding it come to him, it breaks free from the Vine and equips itself around him.  With the armor he destroys the Vine’s weapons and kills all of them in a rage. 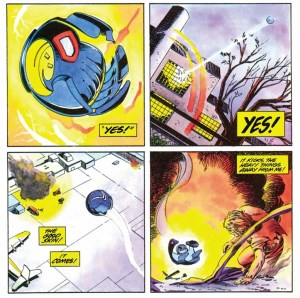 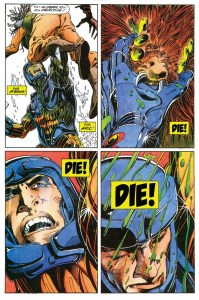 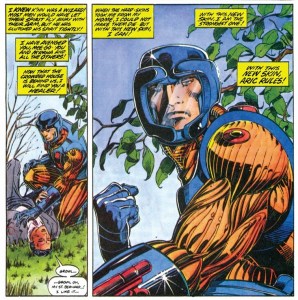 He finds Ken still alive and vows to find someone to heal him.  Now knowing how powerful the X-O Manowar makes him, he makes another decision, that with his new power he will kill the Vine.