If there is any hero that understands the necessity of looking good while fighting crime, it is Michael John Carter.  As Booster Gold, craving all the attention that being a super hero brings, he knows that you have to look good in action to get the publicity.  Booster also knows that you have to change up your look occasionally to keep the cameras flashing, as he has gone through many different costumes over his relatively short life span.  Booster’s one to always love the press so we were given access of his extensive wardrobe and found our favorites from over the years.  Of course getting lots of attention means you can’t exactly hide the missteps, so we found the worst costume Booster has worn.  Take a tour with us through a look back on what we think was this glory hound’s best, and what was his worst fashion decision was.

5.  Mark XI:  The Mark XI was based on a mixture of his original technology and Superman’s energy containment suit.  It doesn’t stray to far from his original, but it does have some key differences.  The star which normally is featured centered on his chest gets skewed to his left.  The blue of his costume then, instead of being symmetrical, cuts across as well.  It was different and not used for very long, but we do appreciate the change of pace it brought.

4.  Mark X:  The suit designed by Blue Beetle II for the most part looks fairly similar to his original design, but has a much greater armored look.  While we do like it, the extra noticeable armor is not as smooth as some of the others, and why it takes a few spots below in fourth. 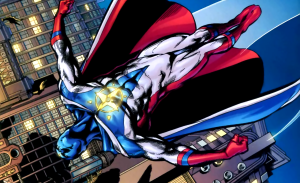 3.  Supernova:  The Mark XI changed things up, and this completely threw the formula away.  Carter had to toss his old identity and fake his own death in an elaborate plan to stop his robotic companion Skeets who was being controlled by Master Mind.  We’re traditional guys and can always appreciate a cape on a superhero so that gets the first thumbs up from us.  He does slightly bring us thoughts of Vance Astro with this design, but we like the color mix of red, white, and blue.  They do it in a way that is not overly patriotic and make him look like a DC Captain America, but instead give Carter a great new look that he made his own for a short period. 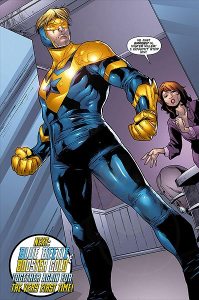 2.  Mark XIII:  The Mark XIII is on of the closest designs to his original with a few changes.  Instead of his popped out collar, it just goes up as a turtle neck.  Then the blue of his costume bleeds down instead of being cut off by a continuation of yellow.  It is a solid look, a great modern take on his suit, but sometimes you just can’t beat the original. 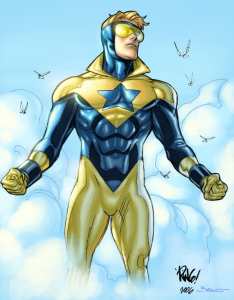 1.  Mark I:  When Booster hit the scene, he knew he wanted the fame and made sure he looked damn good doing heroic acts.  The up right collar gives him a “cool” look, giving him just a little extra flair.  His original colors are a must for the characters, especially as the yellow gives off that little bit of extra flash for the character.  Booster Gold simply looks stylish, and best of all, he knows it.

Mark III:  This costume makes us think that Booster needed a Hulk-buster suit in his closet.  Except for this costume looks terrible and just begs for him to be beaten.  Booster is way to armored up here than he should be and it looks a bit ridiculous.  The crotch piece specifically coming off of the belt is large and out of place;  it should have at least been like a metal pair of briefs, not a metal thong.  His helmet is horrible and looks a biker’s bandanna.  This entire costume just makes him look like he’s over compensating for something.  Thankfully, neither him nor us needed to be subjected to this costume for very long before it was donated to Goodwill.  Then hopefully melted into something useful like candle stick holders.