“I warn you, Batman, once you’ve caught Poison Ivy–you’ll never get rid of it!”

Pamela Isley can be one of Batman’s deadliest foes, but also a antihero in the DC universe.  She has worked alongside the other Gotham villains, but has also teamed with Batman and most recently the Birds of Prey in the New 52.  Before her character evolved into one of our favorite and complex Bat villains out there, she was brought to us in Batman #181  with a more single minded objective.

Over the years her origin has fluctuated during the various DC continuity changing events, but her powers have only grown.  In her first appearance, she was shown with her poisonous kiss that caused infatuation and the ability to scale a wall like ivy.  The chemicals that transformed her into Poison Ivy made it so that her touch can be deadly to a normal human, but  makes her immune to almost all viruses, fungi, bacteria and poisons.  This also makes her body produce a pheromone that can cause mind control over the weak minded.  She has control over all plant life and typically uses vines as a weapon.  While not a power specifically, she is a genius in botany and can create various plant hybrids to produce toxins with different effects. 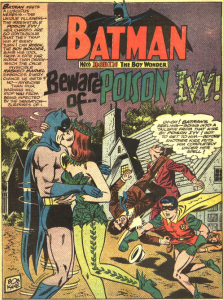 In her first appearance, she went to a pop art display at the Gotham City Museum where Bruce Wayne and Dick Grayson happened to be attending.  Poison Ivy was angry that three femme fatales, Dragon Fly, Silken Spider, and Tiger Moth were the three most wanted villains in the world and had posters of them featured in the gallery.  She claimed she was better than all three at crime and had never been caught, hence why no one had heard of her.  Inviting Bruce to escort her to the police so she could prove that she was the most dangerous criminal around, she walks him outside in front of the paparazzi and uses a light hidden in her lipstick to blind everyone after her picture had been taken. 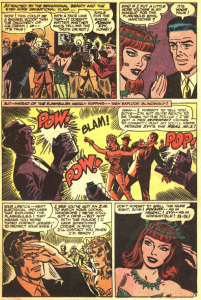 While she runs away, with everyone dazed from the flash, Bruce takes the opportunity to change into his Batman suit and give pursuit. She finds a few street thugs to occupy Batman while she escapes.  From afar, she watched Batman take out the thugs, and becomes impressed by his alter ego and Bruce Wayne. 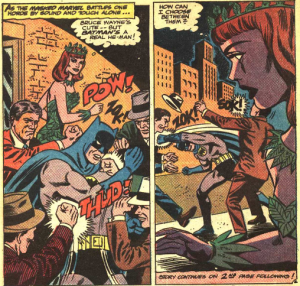 Deciding to cross everything at her list at once, she decides to send fake letters to the three villains she was jealous of, making it seem as they were challenging themselves to who was the greatest, along with several other lower level criminals.  She also sends letters to Bruce and Batman, not realizing they were one and the same, thought the two would battle over her.  Everyone agrees to the free for all fight and the stage is set.

Everyone arrives as hoped and begin battling one another.  For Dragon Fly, Silken Spider, and Tiger Moth, she easily tricks them into grabbing an electrified crown she told them was to be the award to the greatest of them.  The three quickly grab at it and are all incapacitated. 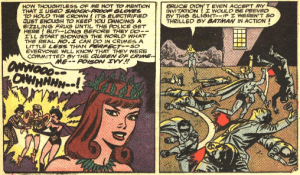 Batman goes to capture Poison Ivy but she pulls him in for a kiss, as she wore a lipstick with a chloroform base.  Robin is quick to arrive to Batman’s aid and Poison Ivy tries to escape.  She begins climbing up a wall, but Batman is able to regain enough focus to throw batarangs at her, to knock her down.  She falls right into his hands, and he and the boy wonder drop her off promptly to jail, but not before she warns that she will be back. 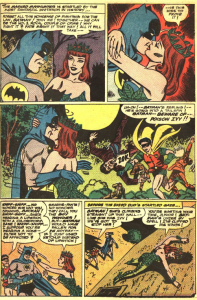 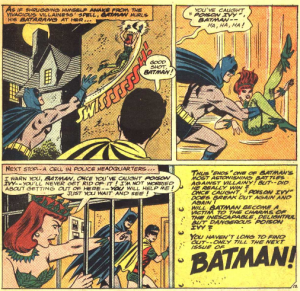 Her first appearance in the end was not a spectacular entrance into comics.  She was fairly a silly character that didn’t really do much but get herself put in jail, for not really even perpetrating a crime.  It would be several more appearances before her powers grew and she became such a formidable foe.  Nevertheless, it was enough to keep her in the Batman rogue gallery for her to keep her promise to Batman, and become one of his greatest villains that today we love.