August Lab Comics released two press releases today showing off some of their August releases, specifically The F1rst Hero and Shinobi:  Ninja Princess.  Read below to find out a little bit more about each series. 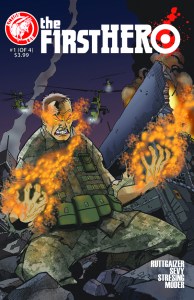 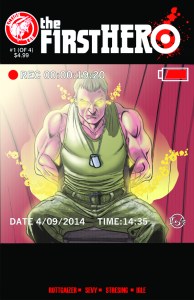 What if everyone who ever had superpowers had gone insane and became a threat to society?  If one man were to manifest powers yet somehow keep his sanity, would he choose to use his new abilities to help the innocent?  Or would he keeps his powers a secret to protect himself and his loved ones from a world that hates and fears his kind?  These are the questions asked in THE F1RST HERO, the latest release from Action Lab Entertainment.

Written by radio host/pop culture commentator and professional wrestler Anthony Ruttgaizer, the series is couched in real world events.  Jacob Roth, a US Marine serving in Afghanistan, is just a few days shy of returning to the States.  In the heat of battle, Roth discovers that he is an “extrahuman”, a being whose extraordinary abilities normally come at a horrible price.  But even if he masters his new powers, Roth must still deal with a society that will see him as a ticking time bomb, easier to dispose of than to defuse. 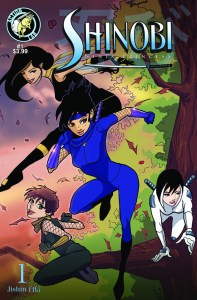 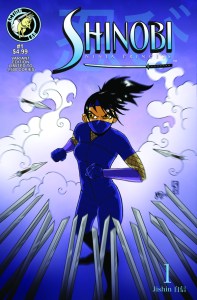 Shianndrea Toshigawa is just your average, ordinary ninja -in -training. On the run from her father, the Emperor Terminus and the Azumi ninja clan, Shianndrea trains with the legendary Toshigawa clan to embrace the mysterious power within her. Shinobi: Ninja Princess is written, illustrated and created by mastermind Martheus Wade. A prequel to Wade’s most famous creation ‘Jetta: Tales of the Toshigawa’, Shinobi; Ninja princess explores her formative years as Shianndrea struggles against her destiny .The all ages action/adventure series takes a manga inspired spin on this classic coming of age story and returns to a universe of warring clans and high adventure.

Wade’s approach is accessible to readers who may cross over from that realm but it manages to stay just light enough to attract the casual reader.  Wade, who’s work has been featured in graphic novels like ‘Mail Order Ninja’ and ‘The Bad Girls Club’ for IDW publishing, is joined by his wife and frequent collaborator, Janet Wade (Jetta: Tales of the Toshigawa, Turra: Gun Angel)  and features a variant cover by Tressina Bowling (Hateink , Princeless: Short Stories for Warrior Women).
Shinobi: Ninja Princess  debuts in August at comic shops everywhere.