As comic book fans, we all have that crown jewel in our collection.  That one item that we treasure above all else in our collection; that if a fire tore through our home, we’d feel the need to rush in to grab like it was our beloved child.  Perhaps that’s an extreme, but I think you know what we mean.  It doesn’t have to be rare and worth a lot, some things just have that certain sentimental value that can’t be replaced.  We want you to share your precious with us and the world.  Send us an email with what it is, why it is, and a photo if possible for good measure so we can show it off on this site every Thursday! 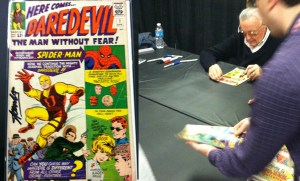 The gem of my collection does happen to be my most expensive issue.  It is not an issue that I’ve owned forever either; in fact I have only had it for two years now.  The price of it is not what makes it so valuable to me, though.  Like many things in comic life, it’s all about Stan Lee, the reason my precious is Daredevil #1.

Two years ago, I was not a convention person.  I had been to a few smaller comic shows before, but never full blown cons with special guests and all that.  Pittsburgh Comic Con 2012 changed that all for me.  I found out that Stan Lee was going to be signing at this specific show and I flipped.  Two of my friends and I decided to drive down to Pittsburgh to meet the man who created so many of our beloved heroes and villains.  This being a momentous occasion, I needed a comic cool enough to match meeting one of my heroes.  This is where Daredevil came into play.

To properly frame this as well, I have to say that going back to 2009, Daredevil was not one of my favorite heroes.  I’d read a few Daredevil comics here and there, but that was about it.  That changed when my brother finally talked me into reading Brian Bendis and Alex Maleev’s excellent run.  I hungrily read every issue of that run and it wasn’t enough.  I caught up on what Brubaker was doing, I went back to the beginning of vol. 2 with Kevin Smith’s run, and finally started back on vol. 1.  After reading all of this, I can easily say that he is one of my favorite heroes.

While I had some other comics Stan Lee had written, I thought if I could pick up the number one issue of I character I loved for a good price, it would be perfect.  So months before the con I started skimming eBay for a good deal on one, and sure enough, I found a copy I could swing.  It isn’t in the best condition, but it isn’t in the worst either.  With it in arm, we finally made our way down to Pittsburgh, and I got to meet Stan Lee.  Alright, that’s not quite right; I was able to stand in his presence, two tables between us while he signed away in an assembly line of comics being fed to him by helpers were he didn’t even have time to look up.  He might as well be the Pope behind a plastic bubble.

Meeting him wasn’t quite what I would have expected, I assumed I’d have a chance to thank him like every other fanboy wants to, for bringing these wonderful personalities into our lives.  Even so, it was still amazing to be there with him, a moment I’ll never forget.  Since then I’ve gone con crazy and seen him numerous times, even getting one more autograph along the way.  In Pittsburgh though I met my hero for the first time and had a blast with my friends.  Nothing will be like the first time though, it was special and can’t be replaced.  If I repurchased Daredevil #1 and was able to get him to sign again, it wouldn’t be the same because the experience is what makes it special.