“In case anyone’s curious, what we have here are articulate quasi-animate, transistory plasmoids.  Pieces of raw energy that come when I call…”

Jubilee has always been a popular X-Man, but that doesn’t mean she hasn’t had a shaky road along the way.  Her school was shut down, she was crucified, she lost her powers, and she was turned into a shiny-glowy vampire.  All from an someone who at one time served as one of the most popular X-Men’s sidekick, Wolverine.  Brian Wood’s current X-Men has brought her back into a monthly title, and gives us a chance to look into the origins of the firework starting mutant.

Jubilee started off with a harsh life.  When she was young, her parents were killed by two hitmen, Reno and Molokai, which subsequently lead her to being placed in an orphanage.  Not adjusting to life there, she ran away and took refuge in the Hollywood Mall.  She took care of herself, stealing food from there and finding a place to sleep.  The downside of trying to take up residence in a mall is that the security guards would try to chase her out, which originally caused her to use her mutant powers.  While running from them, she found she had the ability to create what looked like fireworks to disorient them during her escape.  The “fireworks” were actually energy plasmoids which she can move and explode mentally.  With later training, she was able to use these to not just blind and disorient, but also to create bigger bursts that can actually cause physical damage.  She decided to use her abilities to dazzle mall shoppers and make some quick cash, which also led her to the X-Men. 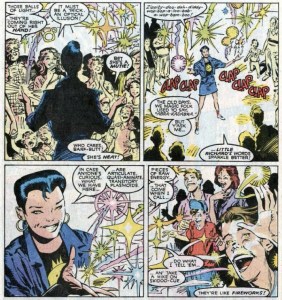 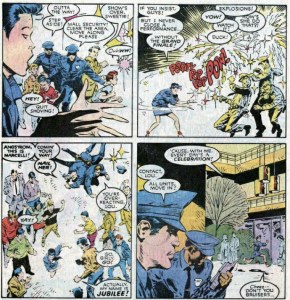 The gals of The Uncanny X-Men had been having a hard time of it, especially Rogue who was sharing her body with Carol Danvers’ consciousness at the time.  Dazzler talks them all into going to the Hollywood Mall for some shopping and relaxation.  Gateway teleports them right inside, which Jubilee sees.  Assuming they must be like here, she begins following them around, not knowing that mall security called in a group of inept mutant hunters to catch her, M Squad.

When the X-Men go inside a bar in the mall, Jubilee is unable to follow them in as she is underage.  While waiting outside, M Squad attacks her with their gadgets, trying to capture her.  Psylocke senses the beginning of trouble as the device used to ensnare Jubilee goes hywire and starts to damage the mall.  The X-Men are able to free her, as Storm lifts the device into the air, and Dazzler uses a concentrated bolt to destroy it.

M Squad is stuck dealing with mall security over the damages, so the women decide to take their leave as Gateway creates a portal for them to return.  The portal remains open after they leave.  Jubilee, being enamored with the four, decides to sneak through the portal, thinking their lives have to be better than hers.

In the end, if Rogue had not had a bad day, Jubilee would never had met the X-Men and Wolverine would have had one less admiring sidekick.  Since that fateful encounter her life took an adventurous turn that we’ve been able to enjoy over the years.  She may be undead, she may not be able to create fireworks anymore, but she still has retained her light hearted, fun attitude that we’ve always enjoyed.