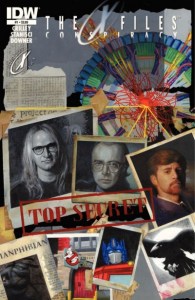 Title: The X-Files Conspiracy #1
Publisher: IDW Comics
Writer: Paul Crilley
Artist: John Stanisci
IDW kicks off a fanboy’s dream crossover series this week with a solid first issue. I must admit, I have always been a huge fan of the Lone Gunmen from the X-Files, even with their own spinoff show. Here they begin their journey to uncover the truth for the American people on several other properties IDW conveniently has the rights to: the Ghostbusters, the Crow, the Transformers, and the Ghostbusters.
The issue begins with the trio receiving an email containing tabloid headlines with future dates on them, which of course reference the four properties mentioned before. Along with them is a future article for a deadly virus that is spreading. It wouldn’t be an X-Files comic if they didn’t go to Mulder and Scully for some help, whose current case appears to be linked to this virus. To hopefully find clues to this virus before it spreads, the Lone Gunmen decide to investigate the tabloid reports, which will have them investigating the Ghostbusters next issue.
For the first part of a crossover event it does a great job in fleshing out the story for what is to come. Crilley seems to have easily narrowed down each characters voice and shows of the humorous and quirky relationship the three can have which is what makes them ever enjoyable. I can’t rave about the art, but it’s serviceable with the action sequences and reminds me of Michael Walsh’s art on the X-Files: Season 10 series. Everything comes together to do what a first issue should do, make me excited for the next issue. 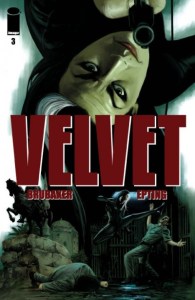 Title: Velvet #3
Publisher: Image Comics
Writer: Ed Brubaker
Artist: Steve Epting
The team that made Bucky Barnes super cool are at it again. If you are not reading this comic I have one question for you; why the hell not? This series is the ultimate spy thriller. Each issue has been fantastic and just keeps making its case that if they are not already, Hollywood needs to get of their asses and get a movie in production for this.
Retired spy Velvet continues her journey to find out who set her up over the death of Agent X-14. With the help of one of her old contacts, she realizes that she needs to talk to the wife of a Yugoslavian General in order to retrace the agent’s steps. Tracking her down is not easy, but Velvet uses her charms to find her. Once found though, things don’t go quite like the spy would have preferred.
Brubaker’s dialogue is fantastic, as if it has been cut from the best James Bond movie ever made that we’ve never seen. Velvet is sexy and clever which comes out in every page. Epting’s art is just as fantastic; he was born to draw this book. His art and the colors fit the story like a glove. If you haven’t started to read this yet, get the back issues and catch up because you’re missing out on one of the best series out right now.