What a nail biter the C2E2 2014 Battle of the Cosplayers turned out to be!  Votes were coming in through the last second before the closing of the poll and first was decided by only three votes!  We have never seen a Battle of the Cosplayers come this close.  This was the first time we decided to use a semi-finals run to narrow down the poll, just from the fact of how many wonderful cosplayers descended on Chicago this year.  We saw some of the best costumes we have ever seen before at the convention.  Now you have chosen the winners this year, so see below to who you thought was best of the best at C2E2 2014! 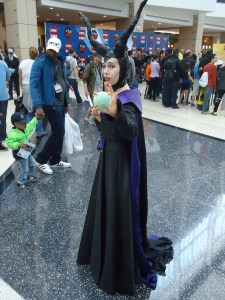 As referred to in the poll, Maleficent #2 rocketed to the top is this fantastic costume.  This year was a great time for Maleficent, especially with the Angelina Jolie film coming soon, and this costume nailed it!  Sleeping Beauty beware, there was no stopping this sorceress! 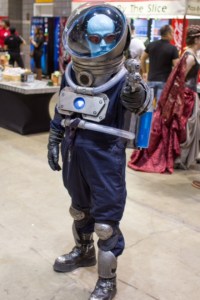 Does anyone else feel a chill in the room?  This Mr. Freeze costume is easily the best cosplay we have seen for any Batman villain.  Everything was pitch-perfect on this costume for you to feel like you could actually be frozen at any second by this diabolical Victor Fries.  The entire suit was so well crafted, it was hard not to love 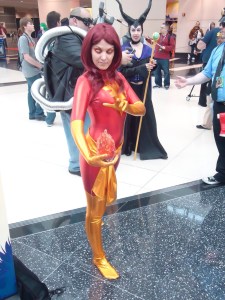 This year proved something that the entirety of the Marvel Universe, including a few destroyed planets and races, know;  there is no stopping the fury of the Phoenix!  Jean Grey was resurrected once more in this fantastic costume.  Some of the small things make this costume perfect, such as the fireball in her hands and, if you look close enough, the fire in her eyes.

We had an excellent time at C2E2 this year and loved seeing all of the wonderful cosplayers that attended.  Thank you to everyone who dressed up so we could witness fandom at its finest, no matter the costume, all of them were great.  We plan on being there next year to hopefully witness everyone coming out once again in their amazing costumes!  For now we sign off on another Battle of the Cosplayers, but hopefully you’ll join us this coming weekend for when we attend Motor City Comic Con in Detroit to root out some more amazing cosplay!