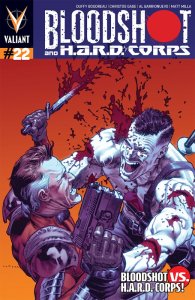 Bloodshot and H.A.R.D. Corps proved to be the biggest surprise for me this week.  I have always heard good things about the series but finally had a chance to check it out this week, and wow!  I feel depressed that I haven’t been reading this series earlier.  This issue was fantastic, pitting Bloodshot’s own team against him in a spectacular issue, story and art.

H.A.R.D. Corps member Genius is slowly starting to lose his powers and Bloodshot decided to have a heart to heart talk with him.  The two seem like good buddies and it makes it seem the two might even hug it out, until Genius’ head explodes.  Guards are on the spot immediately and Bloodshot it forced to shoot his way out of their headquarters, getting wounded in the process.

After seeing the footage, the entire team is ready to put Bloodshot down for good, especially Flatline who had a relationship with Genius.  The team is reluctant to go after someone who has access to the bombs in their brains, until they are told a way has been found to block Bloodshot’s nanites from hacking in, giving them 48 hours.  The team agrees to take him down, not knowing that the 48 hours is actually more like 90 minutes.

In Flatline’s rage, she convinces one of the new techs to amp up her power before she takes Bloodshot on, hoping to kill him.  The boost works for an extra powerful blast, hitting a boulder that crushes Bloodshot’s lower body off and nearly, if not actually, killing Flatline in the process.  As the team rushes to the spot, the two have a quick moment to talk where Bloodshot tells her that things might not have gone down with Genius as they seemed.

I can’t rave enough about the excellent job of Barrioneuvo did with the art, I felt like I wasn’t just viewing a comic book, but a high stakes, big budget action film.  The action scenes were intense and powerful.  All coupled with the fantastic story in which Bloodshot was being screwed just as much as his teammates were.  If things were already looking bad for Bloodshot and the team, the last page shows even more hell ready to descend down on them.

This turned out to easily be the best book this week.  It had the perfect mix of everything inside and most of all made me enough of a believer that I have to see what happens next week.  In one issue this transformed from a series I had just heard things about to the top of my stack. 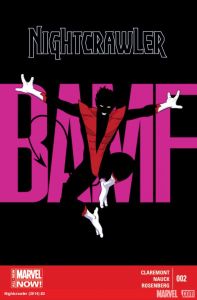 I never even realized how much I missed Nightcrawler until he was gone.  He has always been one of my favorite X-Men characters, but with all the different events in the X-Men universe, including bringing in the Age of Apocalypse version, I never really had a chance to miss him.  What I now realize is that I couldn’t miss him until I read this book that has brought Nightcrawler, and Clarmemont himself, back into prominence as it should be.

Nightcrawler and his adopted sister/girlfriend Amanda return to their original home searching for their mother Margali.  They still don’t know why Trimega was targeting Amanda and fear that he could turn his attention to their mother.  Our favorite swashbuckling mutant quickly finds out that if you come back from the dead, you should probably call home to warn family members and friends, who might freak when you show up not dead.  Such is the case here causing the two an unnecessary, but fun, fight with their former circus friends.

Once Nightcrawler gets them to believe that he is indeed the genuine article, his mother come out from the shadows.  No one at the circus has seen or hear of Trimega, but it seems as though Nightcrawler made a mistake.  Trimega didn’t know about the circus, but followed the two there for a battle next issue.

The best part of the issue comes from a reexamination at how Kurt and Amanda grew up together and eventually fell in love.  These were light, fun, and tender moments that seem to give the possibility these two could rekindle the spark.  Well if not for those little Bamfs getting in the way at the wrong moments.  Speaking of the Bamfs, they have been a great addition to the book being Nightcrawlers little side kicks.  Beyond stopping him from being able to make a move on Amanda, they are a great addition to the action scenes being flung around.

Back in the day, everything Claremont wrote was amazing to me.  His original run on the X-Men is unmatched.  These days most of what he has written I’ve been disappointed with.  Nightcrawler has been spot on in these first two issues and has revived my faith in the writer.  He knows Nightcrawler better than any writer and makes it look easy; he is crafting a light-hearted adventure which is exactly what the doctor ordered for our revived hero. 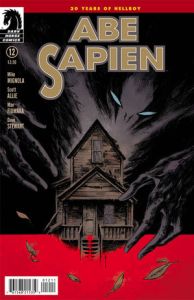 An Abe Sapien story that hardly showed Abe Sapien.  It actually worked well for a emotionally heavy story of two people after the world has gone to hell.  One a twisted son who had killed his father and the other a mother who lost her daughter and now is being held against her will.  Then you have Abe who gets a rifle shot to the stomach.  Fiumara’s pencils were perfect from the story, conveying well the desperation of all the characters. 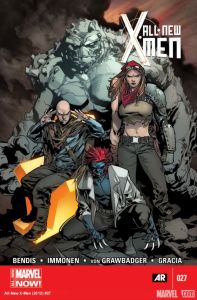 The Future Brotherhood has come knocking at the new Xavier School.  Except not everything is making sense as some of those Future Brotherhood members were killed last time we saw them.  Could this be one giant psychic attack against the team?  We will find out soon enough.  We also get some interesting back story information on Xavier and Rave that explores their origins.  Will Mystique ever stop having babies and giving them up?  While we doubt that will be answered in the next few issues, we have a feeling some more revelations are coming our way, along with the Future Brotherhood getting their butts handed to them, even with the X-Men seeming outmatched right now. 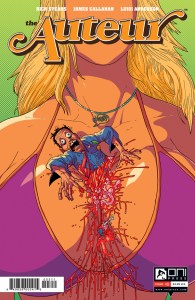 Coming into The Auteur in the third issue was slightly like finding yourself in the middle of a circus after having took some powerful LSD.  You don’t know where you are, but crazy things are happening around you while everyone else begins to melt.  Nathan T. Rex’s newest movie has real life murders occurring, but what can you expect when you hang with Cthulhu?  It also contains a scene that reminded me of something that I never though I’d see again after watching Bruno.  Just like a powerful hallucinogen, it is not meant for the young, and it makes you curious for more. 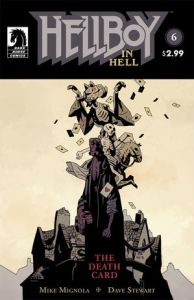 The thing for Hellboy actually being in hell, he is going to come across certain people who might hold a grudge against him.  Of course this can’t turn out well so we get a full blown battle in which Hellboy is not prepared.  You get all the quirkiness in this one-shot story that you would expect from a Hellboy title, and of course Mignola’s beautiful pencils. 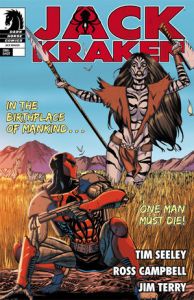 The one-shot contains three separate stories that all contain Jack Kraken on different assignments.  The problem is that all three stories were not that exciting.  Multiple stories in one issue can be done right, but each story has to be interesting and focused enough to pull off, which you just don’t get here.  The art was not bad, but there was nothing compelling enough to make your pull list this week. 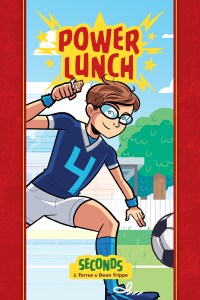 The second go around with Power Lunch was a great all ages read.  If you missed the first, Joey is a normal kid who gains various powers depending on what he eats.  This time his friend Jerome talks him into using his ability to help himself on the soccer field.  It’s an interesting concept that is great for kids, but a fun read for the parents too. 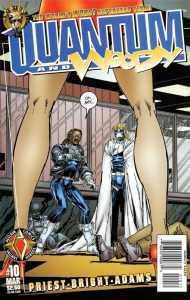 Woody’s hijinks land him in a lot of trouble this week which of course means trouble for Quantum is not far behind.  To get out of it, it looks as though he creates even more trouble for the pair which will be continued next issue.  As usual, the issue is light in fun even as chaos ensues and a person explodes into worms, or whatever they were.  Woody really seems to have screwed things up for them all very badly this time, will anything he does at this point be able to redeem him to his brother and girlfriend? 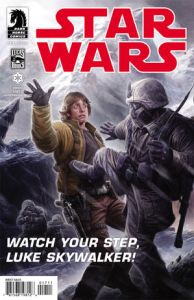 Oh Luke Skywalker, you can’t help but get in trouble!  He’s like Dennis the Menace, except he didn’t really cause the trouble, but doesn’t do much to stop it either.  What would be the better solution for a aspiring young Jedi, take down a few rangers that are going to bring a lot of trouble down on you and your friends, or try to run back to your friends and tell them, which will possibly take a couple of days?  I guess I just expect more from my heroes than running away.  If he did stop the bad guys, I guess next issue wouldn’t be even more action packed with the worse bad guys. 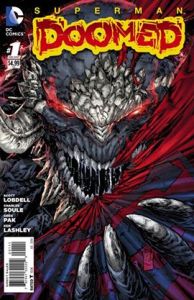 I was a huge fan of the original introduction of Doomsday during the Death of Superman event, but so far I felt underwhelmed but his new appearance.  The issue gives us some awesome fight scenes with Superman, Wonder Woman, and Steel taking on Doomsday, but nothing else in here was that interesting.  It was nice to see Clark still going to Perry for advice, however.  The biggest complaint for the issue was the art.  The pencils were just so-so, but the colors were probably the worst part of it.  The purple virus radiating off Doomsday was splotchy and made it hard to see most of the action.  The big final spread was so confusing I needed to look at it three to four times just to realize what had happened.  In the end, this was not in the same stratosphere as the original. 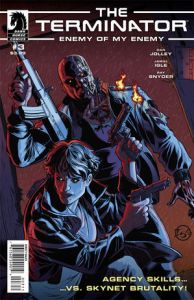 It is always fun to see that moment when a character is fighting a Terminator and realizes that they are screwed.  The issue is practically just one big action sequence, but when you’re in Terminator country, that’s what you want anyways.  Igle’s pencils do a great job of portraying the fight sequence which makes the issue work.  It also is fun to see that moment when a character thinks they can make a deal with a robot killing machine and we know they’re screwed. 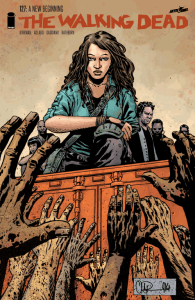 The war is over and life goes on.  Things have settled down for our favorite survivors with an undisclosed amount of time having passed.  Everything seems to be going good for them and they even get a few new additions to the crew.  And then things go bad.  At least that’s what we’ve come to expect from The Walking Dead, but things actually stay fine from beginning to end.  It is nice to see everyone living the dream, but it makes for a slow burn story this week. 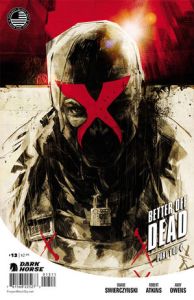 After being captures, tortured, and beaten, X is pretty pissed off.  In the opening he quickly gets to unleash some of that anger as he makes his escape to get the true vengeance that he wants.  That doesn’t stop him from having a little fun with Deathwish beforehand though.  Leigh betraying him has left most of his stashes of gear vulnerable, but X is a crafty man and gets his things back nonetheless.  The issue was fantastic on its own, but you can just feel the build up that soon, Tango and X are going to have some words, and they won’t be pretty.

Flash: Crazy for You Review