“You?  You’re Deathstroke…the Terminator.  My father told me about you…and the H.I.V.E. gave me powers like yours…maybe even better.”

Last week our weekly Friday First Appearance took a one week hiatus just as our Costume Closet had.  Now we are back and have a special two-fer for missing a week.  Our entire staff is huge fans of the DC and CW show Arrow, and if you have been keeping up with that, you know very well that Deathstroke has been an integral part to the show.  A version of Ravager has now been unveiled on the show as.  In the comic books (we won’t name names in case you are not caught up) this specific character was never Ravager, so we thought we would go to the original combo, father and son, Slade and Grant Wilson, who were conveniently enough introduced as their villainous alter egos at the same time.

Slade Wilson origins begin at sixteen as he lied about his age to enlist in the US Army.  After serving a tour in Korea, he rose through the ranks and was given the rank of Major.  It was after this that he met his future wife, Captain Adeline Kane.  She took a quick interest in his skills and privately trained him in various forms of warfare.  The two soon married and she became pregnant with their first child, Joseph.  Now long after, Slade was shipped off once more, this time to Vietnam.  From his time there, the Army decided he would be the perfect candidate for secret experiment that would give him superhuman physical powers.

When his career ended with the Army from going against orders, he became a mercenary and hid his new job from his family.  The lie caught up with him when another mercenary named the Jackal kidnapped his son and demanded to know who had hired Slade for a recent contract.  Slade refused to reveal the information and instead killed the Jackal, but not before Joseph’s throat was cut, permanently damaging his vocal cords.  Adeline blamed Slade for the lying and Joseph’s injury.  In a fit of rage, she tried to kill him by shooting him.  It was unsuccessful, and instead of killing him, only destroyed his right eye.

This brings us to Slade’s other son, Grant.  Grant lived in New York City with his girlfriend Carol, and was slowly becoming friends with members of H.I.V.E..  His relationship with Carol was already on the rocks when Starfire crashed through their apartment during a battle with the Gordanians.  The newly formed Teen Titans came to the rescue.  The resulting battle was enough to destroy his apartment and convince Carol to leave him, both of which he blamed the Teen Titans for.  H.I.V.E. informs him they can give him the abilities to kill the Teen Titans. 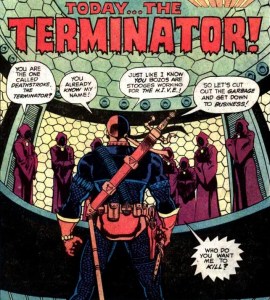 This brings us to the The All New Teen Titans #2.  H.I.V.E. tries to hire Slade to kill the Teen Titans.  When they cannot come to terms, they turn their defenses on to test him.  He makes quick work of the defenses and leaves.  This forces the H.I.V.E. to use Grant and imbue him with super human powers, which unbeknownst to him, will burn him out and kill him the more he pushes himself.  He uses his new found strength and speed to try and defeat Cyborg.  He is no match for Cyborg though and it is up to Slade to save him.

Bringing him back to his townhouse, in costume Slade introduces himself to his son, who has no idea that his father is Deathstroke.  Slade tries to warn that with how H.I.V.E. augmented him, it will eventually kill him if he is not careful.  Grant, however, will not listen and leaves to find the Teen Titans and kill them himself.  Slade follows his son and the two attack the Teen Titans together.

It does not take long into the battle for Grant to overexert himself.  His powers begin to burn out his body.  The Teen Titans try to remind Slade that he should blame H.I.V.E. as they were the ones that gave him the powers that killed him.  He does not see at that way, blaming the Titans since the contract was out on the team.  Taking his son’s body away for a proper burial, he decides that he will take up Grant’s contract to kill the Titans, which is exactly what H.I.V.E. has hoped for all along. 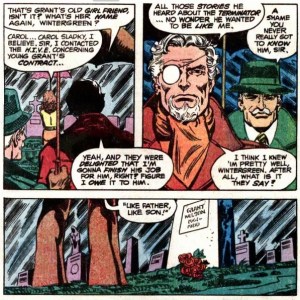 Deathstroke the Terminator has since lived a long fruitful career and still ranks as one of the most popular villains of any publisher.  He has been a thorn in the side of numerous DC heroes, beyond Oliver Queen, whose life he is currently wrecking in Arrow.  Grant, however, has been resurrected pre New 52, and technically never died in post New 52, but the Ravager name itself has been passed on to numerous people before, including his sister Rose at one point.  All in all, the Wilson family is not one to be trifled with.