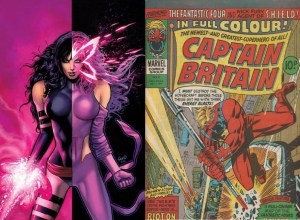 Psylocke currently is one of the most dangerous X-Men around; no one wants to mess with a deadly Britsh/Japanese ninja mutant that can create a katana and knife out of psychic energy.  She is currently popping up in the new X-Men series, as well as the Uncanny X-Force to take care of the dirty work on both teams.  She has come a long way since her purple armor days, but many people forget she’s come even further than that.  In the US, the New Mutants Annual #2 in 1986 was her first appearance here, but she originally made her first appearance ten years prior in Captain Britain.

Chris Claremont created her as supporting character for her brother Brian Braddock in the series.  When first introduced, she frantically runs up to Brian to report their brother Jamie had been in an accident.  Her only skill shown is that she can fly a plane, just not very well.  As they fly back home and she explains what has happened to their brother, the villain Dr. Synne is introduced who enters Betsy’s mind and causes her to crash the plane.

That is the first taste of Psylocke.  No powers, no purple armor or hair, nothing resembling the Psylocke we’ve come to love.  Just a blonde charter pilot who happens to crash planes when an evil Dr. happens to get in her head.  She has changed from her first appearance more than almost any other character.

Her first appearance is nearly one of the worst of any super hero; this is keeping in consideration that the character is unrecognizable to someone who picks up a X-Men comic today.  That is not a bad thing in my mind though; for fans of the character, she has such a rich story that has developed over time.  Certainly for newcomers her backstory is going to be confusing (such as how is she Japanese if she is British), but for fans, it’s been a great ride, and keeps getting better.