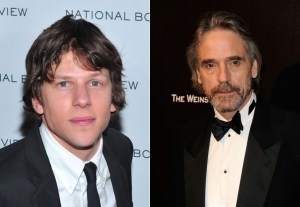 Warner Brothers has confirmed today the casting of The Social Network and Zombieland star Jesse Eisenberg as Lex Luthor and Jeremy Irons as Alfred in the upcoming Superman/Batman film. It would seem the WB and DC are trying to stuff more characters into this film than Fox has in X-men Days of Future Past film.