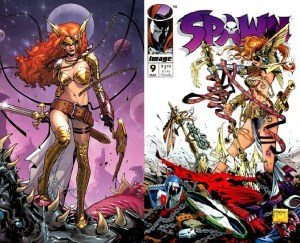 “I don’t want to hurt you either.  I want to destroy you.”

Lawsuits seem to be aplenty when it comes to comic books these days.  You’ve had cases over Stan Lee’s Marvel creations, the struggle for the rights for SuperMan, and then the fight over Medieval Spawn and Angela between Neil Gaiman and Todd McFarlane.  This isn’t about the legal aspects though, it just happens to be why Angela has been such a hot name in comics lately.  Of course Gaiman gained the rights to her (Medieval Spawn as well) and here we are with a unique situation, a character created in Spawn carried over and introduced into the Marvel universe in Guardians of the Galaxy.  While they’ve done a good job integrating her into Marvel so far, at her roots she is an angel and hunter of Hellspawn.
The story begins 800 years before as she hunted the Medieval Spawn.  Tricking the young Hellspawn into thinking she was attacked and her sister abducted by an ogre, she leads him into a cave where she quickly dispatches him.  During this the reader is given a starts guide to hunting Hellspawn for which Angela seems to have mastered.
Returning to the present day, Angela approaches her handler on Earth and reveals she has received a hunting permit to kill Spawn.  She believes this will be an easy kill;  Al Simmons is still fresh in becoming Spawn and is still living in the alleyway with the other homeless.  As Spawn begins to learn more about his current condition and powers from Cagliostro, Angela takes the opportunity of him being distracted to strike.  Spawn’s costume instinctively protects itself and host from the attack and send Angela hurling towards the atmosphere.  With his attacker hurled away, Spawn investigates Angela’s weapon against Cagliostro’s advice and is transported away.
First off, not many people have had a chance to draw Angela, but Todd McFarlane draws her the best either way.  Her original costume never really changed throughout Spawn, and even now with Joe Quesda’s new designs for her, she looks fairly much the same.  McFarlane did a great job from the start so there is no reason to change much at this point, her unique look is part of what makes her a unique character.
In this first appearance she is shown to be powerful as she takes on the Medieval Spawn and vanquishes him, but then when she takes on Al Simmons, she gets taken down pretty easily.  Their fight is nothing more than a few panels and it’s done.  It gives you a lot of anticipation in this issue that Spawn will have met his match, but that doesn’t last long.  Just after a great few pages of introduction, they should have done more with her in this issue, at least show more of a struggle in the fight between her and Spawn.
Once she was simply a badass angel that Gaiman and McFarlane brought to us before law suits shook her into another continuity.  Now you can find her protecting the Earth with the Guardians of the Galaxy instead of hunting Hellspawn.  While I can’t say she has always been one of my favorite characters, I can say that McFarlane knew what he was doing when he drew her into our lives and looking where she came came from makes it all that more surprising where she is now.