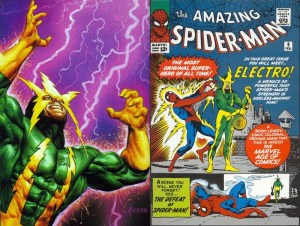 “I’m Electro!  Do not resist me and perhaps you will live to see another day!”

Last weekend we decided to go into Max Dillon’s closet and see which different costumes he has worn as the masked criminal Electro over the years, which you can find here.  In following with Electro’s big movie break in The Amazing Spider-Man 2, we have decided what better time to look at our favorite electrical based villain than now all the way back in Amazing Spider-Man #9.

Max Dillon started his life journey relatively normal and crime free, albeit being very self-serving.  He was an electrical engineer and worked on power lines in New York.  One day while working on the lines above, a lightning bolt struck the him and the pole.  Miraculously, Max found himself unharmed.  It was not until he was at home later that while fumbling around with some metal clothe hangers, he found that electricity could pass in and out of his body.  He first worked on creating a metal rig that he could wear to help him focus the electricity, and then decided to create his costume.  With his new powers and a mask, he decided as Electro he could help himself to all the money that he could want. 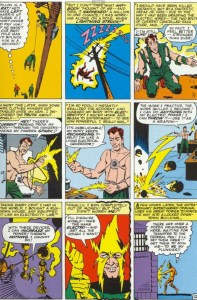 In the start of the issue, he decided to start his crime spree by robbing an armor car.  With his electric powers he easily scares the guards into giving him the money.  As easy as that was, he sets his sights on a bigger score, at the Forrest Hill’s Bank.  None other than J. Jonah Jameson is there to witness the bank robbery.  Seeing a masked man with powers stealing, he automatically decides that Electro must actually be Spider-Man in disguise.  He publishes that in the paper, and offers up a huge reward for photos of proof of the claim. 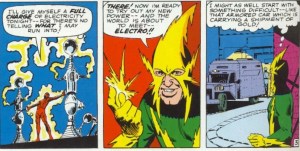 Spider-Man will not let these false rumors stand and goes searching for Electro.  It does not take him long to find Electro on a rooftop trying to use his powers to break into a hidden safe.  Not realizing the full extent of Electro’s powers, Spider-Man swings into battle, but is shocked unconscious after touching him.  Electro leaves, believing he has killed the hero, which of course was not the case.  Spider-Man wakes up, depressed from losing, and the fact that Aunt May is very sick and needs a very expensive surgery.  He decides to make fake photo’s of Spider-Man changing into Electro’s costume to get the reward from Jameson. 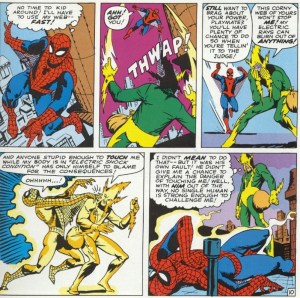 Gaining even more confidence believing that he killed Spider-Man and the world believes Spider-Man was Electro, he decides to make his schemes even bigger.  He decides he needs underlings, so breaks into the prison to free them and make them join him.  The commotion drives Spider-Man to the location, this time more prepared with rubber gloves and boots.  He begins by rounding up the escaping prisoners, and then goes after Electro.  The rubber gloves and boots help in the fight, but are not enough to give him the advantage.  Spider-Man gets backed against a wall, that a happens to have the water main on it.  He blasts Electro with the water to disrupt his powers and beat him. 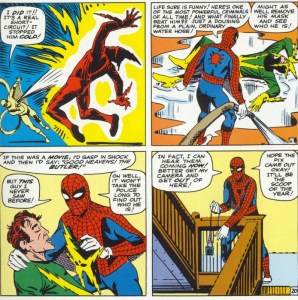 With Electro defeated, Peter goes back to the Daily Bugle where Jameson now knows Electro is actually Max Dillon.  Peter is fired, until he offers up photos of Spider-Man and Electro battling, for free as long as he keeps his job.  Jameson ecstatic about the photos, welcome’s Peter quickly back.

Electro eventually breaks out fairly quickly, even taking on Daredevil in the second issue.  He learns more about his powers and abilities and becomes the powerhouse the we know and love, but who can’t help be defeated every-time.  He has the awesome costume, he has the awesome powers, and he really could take on the whole Avengers by himself, its no wonder Max Dillon has stayed with us as long as he has.