Two weeks have past since the end of Gem City Comic Con 2014 and it is hard to believe.  We had never seen such a big cosplay turnout for the convention as we did this year.  We witnessed some amazing fans turn out to represent their favorite characters in Ohio and couldn’t have been happier with what we saw.  Every costume was fantastic at the convention, but the top three winners have been decided! 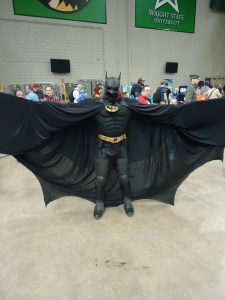 How can you not love some Batman cosplay!  Especially modeled after one of the best Bat suits from the movies ever (at least in our opinion.)  Not only that, but that wing span is very impressive, he surely is ready to glide high above the con! 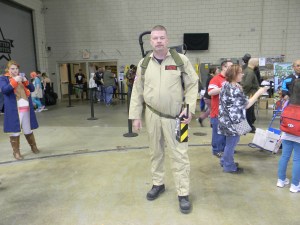 If there’s somethin’ strange in your neighborhood, who ya gonna call?  Well you know what part.  Who doesn’t love the Ghostbusters?  In memory of the late great Venkman, Harold Ramis, it just makes the costume that much more terrific without even going into how awesome the proton pack and ghost trap were. 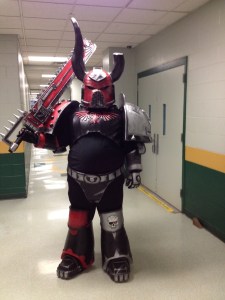 Master Chief has nothing on this Space Marine.  The costume is extremely well done and very intimidating!  That wicked looking sword alone makes us scared and not want to get into a fight with him.  Congratulations on the first place finish!

We had an excellent time at Gem City Comic Con this year and loved seeing all of the wonderful cosplayers that attended.  Thank you to everyone who dressed up so we could witness fandom at its finest, so matter the costume, all of them were great.  We plan on being there next year to hopefully witness everyone coming out once again in their amazing costumes!  For now we sign off on another Battle of the Cosplayers, but hopefully you’ll join us this coming weekend for when we attend C2E2 and see what cosplay Chicago brings us!