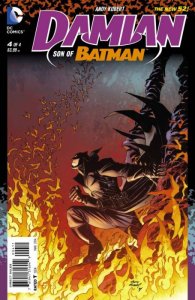 Damian Son of Batman was a miniseries I wanted to like.  I like Damian as a character and was sad to see him temporarily die (let’s face it, he’s a comic character and he’ll be brought back at some point.)  This is more of a What If? miniseries for DC, what would happen if Damian was alive and took the mantle of Batman, so this is out of continuity.  Normally I like what if scenarios, but the problem here is that it tries to pack to many emotional moments into too few issues and becomes a jumbled mess.

The finale picks up right where the last issue left off, the older, retired Bruce Wayne has been captured by the new Joker and Damian is facing down a barrage of villains to save his father.  Damian starts to lose the battle, until he finally finds the right motivation; not wanting to disappoint his father.  He dispatches the villains and is ready for the final confrontation with the new Joker.  The fight is fairly quick but brutal as the new Joker is beaten to a pulp.  Damian slices him open, but doesn’t deliver a killing blow, deciding he must live by his father’s code even if it means this new Joker will inevitably be back.  Picking Bruce up, he leaves the scene, only for the original Joker to pop out of retirement and shoot his admirer in the head.  Back at the cave Damian sees reports of crime on the rise as the criminals realize that Damian’s Batman will not kill once more, so he is left to reestablish his feared reputation throughout Gotham.

First with the good: the art is really good.  I love Andy Kubert’s art and it doesn’t disappoint for the most part. There are a few points I didn’t like with the art though, such as the new Joker’s design, specifically his shark teeth were very distracting.  It almost looked like Croc had slapped on the Joker’s face.

Now with the bad:  the story was all over the place.  All throughout this story, things happen and are just not explained.  I still don’t understand why Alfred apparently died and his consciousness was transferred to Damian’s cat.  Then you have this new Joker who is not fleshed out one bit.  He was a bland villain that was killed by the actual Joker, who appears from thin air inexplicably.  They never explain whether Bruce lives at the end either, he gets dragged out by Damian and is not showed again.  This story is about Damian, but Kubert still should have showed the fate of the original Batman.

What would have worked out much better is if DC and Kubert had spread this entire story out by a few more issues.  It could have then had proper time to explain out things fully.  The way it is, I’d say unless you had been reading this already, skip it and wait for it to join the dollar box. 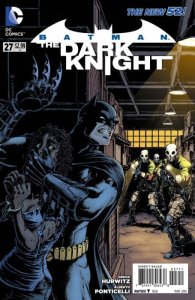 Silent issues can be a blast.  In theory, Batman should be a perfect hero to have a silent issue as he relies on stealth a great deal more than many heroes.  The thing is to pull it off, you need to have fantastic art.  Now I’m not saying the art was bad, but it could have used some improvement.

Batman has found himself caged after being captured by the Penguin’s thugs as he tried to dismantle the human trafficking ring.  Being Batman, he doesn’t stay trapped for long and frees himself in a dramatic, explosive fashion.  Now free, he makes his way to the sweatshop and makes quick work of the guards their, freeing the workers and reuniting the mother and daughter.

His work is not done yet.  He tracks down the Penguin, beats up some thugs, and drugs the mastermind to jail.  The workers are all sponsored by Wayne Enterprises to get their visas, the Penguin gets his lawyers to seemingly get him out of jail, and everyone is happy.  The end.

As I started with, the art isn’t bad, but there are just certain things that don’t sit right with me.  First off, Ponticelli has a unique way to draw mouths and chins that I found distracting.  Some of the fight sequences were hard to follow as well.  As Batman demolished the thugs, it was hard to see what he was actually doing; you would see them taken down in several scenes without seeing Batman in them.

It was a good story overall that did have a nice emotional touch with the mother and daughter.  The stealth aspects worked well for the silent issue as Batman stalked his prey.  Some better panel work would have improved the issue overall, but this was enjoyable in the end and worth checking out.

The Wicked + The Divine #18 Capsule Review