Who doesn’t love Harley Quinn?  Just look at that kooky smile and you can’t help but fall in love.  She’s like her boss the Joker, cool and crazy, but slightly more sexy and comes with a slight less chance she’ll beat you to death with a crowbar (just slightly though.)  She jumped into our hearts in the 90’s Batman:  The Animated Series and since then she’s had a few changes in wardrobe between her different media appearances.  Sit back and relax while you scroll through what we think are the best of the best

Feel free to discuss my choices or mention your favorite or even least favorite in the comments. 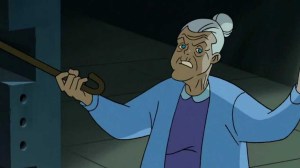 5.  Batman Beyond Return of the Joker:  Possibly only hardcore Batman fans will recognize this costume.  She trades the jester getup for a modest dress and a spiffy cardigan 40 years down the road.  Plus she has traded the giant mallet for a cane.  Probably a crazy funny death cane.  Hooligans beware! 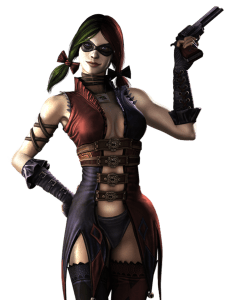 4.  Injustice:  Um, wow, she must be cold.  Really cold.  Someone should give her a robe.  Or maybe it’s just summer where she is and this doubles as a bathing suit.  Awesome choice on swimwear.  Alright, time to stop staring… 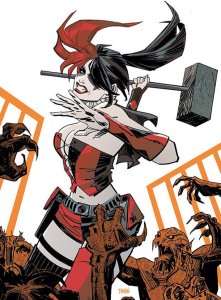 3.  New 52:  Harley stuck with her original for a long time, but the new 52 brought her new clothe.  You can tell fanboys’ dreams came true here and she started showing some skin.  Of course she has to be busting out of her corset.  Look down, look up, mallet to the face I suppose.  I like the jester hat, but it is a nice change of pace for her to be without it; color coding her hair to the costume is a nice touch too. 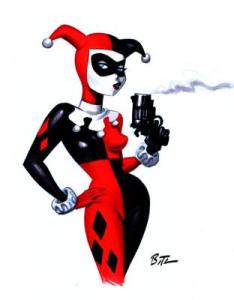 2. Original:  The Harley fans loved enough to get her to leap out of the TV show into comics.  The original is sleek and not over sexualized like her other costumes.  There is something to be said for leaving things to the imagination.  It was a perfect compliment to the Joker’s suit.  This is what she wore the longest, and there is a reason for that. 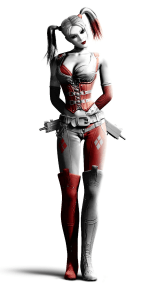 1.  Batman: Arkham City:  A perfect balance of all her costumes.  She isn’t completely falling out of it, but she’s not in a full one piece head to toe either.  It takes her jester outfit but makes it a tad more realistic.  She’s naughty, nice, and had two Uzis behind her back.  Winner!