A few days ago we featured the top 5 costumes from Captain America’s film wardrobe.  Now it is time to go back to his roots and comb through the various costumes that he has worn in the pages of some of our favorite comics.  Having been around since the 40’s, this has given several different costume choices for him, even if most of them have come in the last 30 or so years.  There were some great choices and some bad ones along the way.  We went through them all and narrowed it down to the best and finally the worst. Let us know you agree or disagree with our choices! 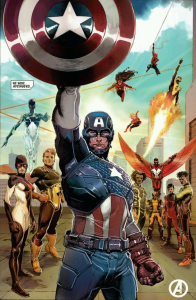 5.  Marvel Now:  They tried to take the original costume and modernize it, but with sub-par results.  The body armor look is a good idea in theory, but just doesn’t work on paper.  The mask especially looks to bulky and is plain off putting.  Its obvious Marvel wanted to bring a more cinematic look to the comics, but that usually doesn’t work;  X-Men in black leather anyone? 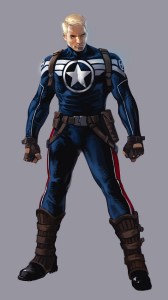 4.  Agent of S.H.I.E.L.D.:  This represents the biggest change in wardrobe for Steve as he needed a new style with Bucky running around as Captain America.  This is also close to what Cap wears in Captain America:  The Winter Soldier.  Just as with the movie costume, I like that it makes him look more like a spy with his new role in leading S.H.I.E.L.D..  It was short lived, but by far the best alternate costume Steve Rogers wore while he was not Captain America. 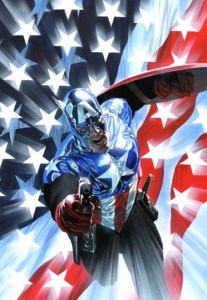 3.  Bucky Barnes Captain America:  The one costume to make the list that Steve Rogers never wore.  Instead this is what his former partner Bucky Barnes donned when Steve was killed.  When Alex Ross does anything, you take notice, especially when he was charged with making a brand new costume for Bucky to wear while taking the mantle.  It works as a nice homage to the original costume, but it also serves to distinguish that this is not the same man underneath.  Perhaps we will see a movie version of this in the foreseeable future. 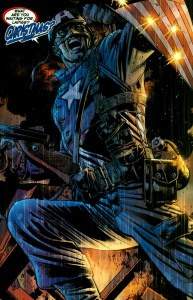 2.  Ultimate Universe WWII:  This ultimate costume inspired our favorite costume from the Cap films, his First Avenger one.  It is a great look in general, but especially for the time period.  He looks like the soldier he is with the straps and belts.  The helmet and mask work in conjunction for a hardened battle field look.  He even has his original shield here which is a nice nod.  Overall it is a great nod to the era it was worn. 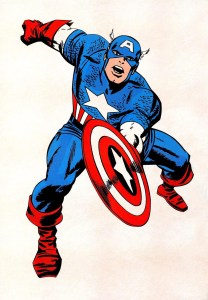 1.  Original:  Many have tried, but no costume in over 70 years has been able to top the original.  It is iconic as it comes.  Maybe a little to pro-American for an international taste, but so what.  When Kirby designed this, he made it to last.  Almost every costume he has worn is either a version of this or if nothing else has taken elements from it such as the A on his mask, the star on his chest.  Let us not forget his shield which he can’t leave home without.  He almost always uses this beyond a few cases, but to be fair, his actual original shield was not this round one and can be seen above with his WWII ultimate costume.  Since it switched after an issue, we’re letting it slide.  Everything comes together for one fantastic costume. 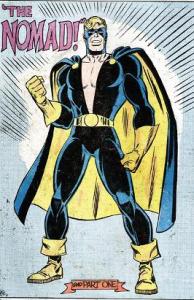 Nomad:  This came from the first time Steve decided he couldn’t be Captain America any longer and would be known as Nomad forever more.  Or just after a year when he decided he could disagree with the government while still wearing the stars and stripes.  He also probably came to his senses and realized that this costume is terrible.  Capes are usually great additions for heroes, but Steve Rogers just can’t pull it off.  The worst offense is the wicked v-neck happy trail.  Does he oil himself up too before battle?  It really makes you wonder what the designer was thinking, or smoking for that matter.

Constantine: Waiting For the Man Review