The second Captain America movie, The Winter Solider is finally upon us.  This will be Chris Evans fourth turn as Steve Rogers (if you count his Thor:  The Dark World cameo) and he has already worn several different costumes throughout these films.  As we have seen too, Avengers:  Age of Ultron will bring us yet another costume change.  Hardcore Marvel fans, though, know that Chris Evans was not the first to transform into our beloved super soldier.  We have gone back in time to the first versions up through today’s films for our top five, along with our dishonorable mention.  This is a special edition in honor of The Winter’s Soldiers release, so this will be the first of two Comic Closets this week.  Check back Sunday for Captain America’s costumes from the comics as well! 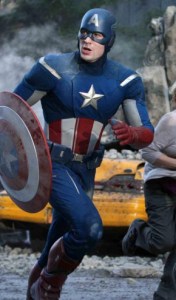 5.  The Avengers / Chris Evans:  Luckily for this costume, a worse costume has been used for Captain America in film.  The first few times I saw The Avengers, I actually liked this costume.  After about a dozen viewings, it started to go downhill for me.  On one hand it tries to invoke the spirit of the original, but on the other hand it just looks slightly silly when compared to the other heroes’ costumes in the film.  While not quite, it almost verges on campy.  It looks very stiff too, it’s surprising he was able to get much movement out of it. 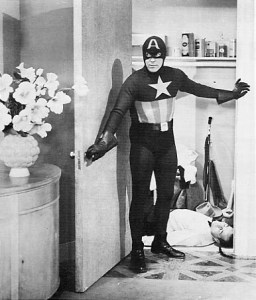 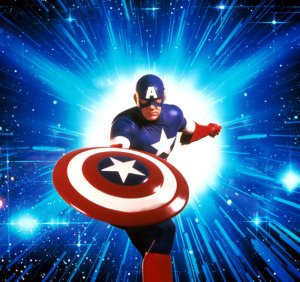 3.  Captain America (1990) / Matt Salinger:  Back when I was but a child, I actually thought this movie was awesome.  Now, not so much.  That doesn’t change the fact that this was a pretty nifty costume.  It is straight original here with the red, white, and blue, along with his trusty shield.  I really enjoy the authenticity, and for the movie itself, it worked.  In the more serious and modern takes, this wouldn’t work but at least once we got to see it practically straight from the comic. 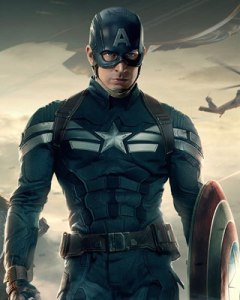 2.  Captain America:  The Winter Soldier / Chris Evans:  This comes almost straight out of the comics as well, with a slight modification.  The comic version didn’t have the mask but they included it here.  I dig that they added it, he looks much better with it on.  The costume works better with his role in the movie than the others.  He might be a super hero, but he is also an Agent of S.H.I.E.L.D. and this is a better spy look then the brightness of his regular threads.  While it is a big change compared to his others, they do keep the star on his chest for the sake of congruency. 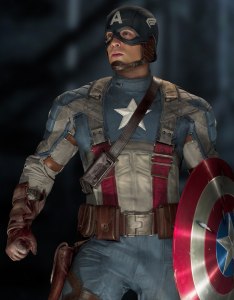 1.  Captain America:  The First Avenger / Chris Evans:  In the Avengers, this is what he should have continued to wear.  This goes leaps and bounds above the rest.  It does a great job in being an homage to his comic origins, but the designers really brought a realistic soldier look to it.  The straps and buckles are a welcome addition, especially when they were able to integrate them as the red stripes.  It isn’t overtly flashy, but it does retain the iconic look to rally and inspire the troops into combat. 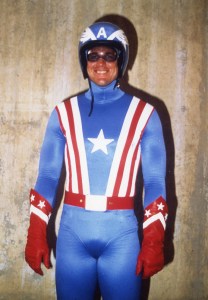 CBS’s Captain America / Reb Brown:  Is this Captain America or Evel Knievel?  What was CBS thinking with this costume?  Sure, even Marvel knows that changing up Captain America’s costumes in the films can be a good thing, but this was a total misfire.  The motorcycle helmet and goggles are a terrible substitute for his normal mask.  The stripes going up like suspenders look hideous and  just seals the deal that this costume should be burned.  That might be a stretch, but not by much.  For a small child going around asking for candy on Halloween, not a bad choice; for a grown man to run around in fighting crime, no please.